It sickens me: ‘Roadies 1’ director Nivedith Alva slams makers for showcasing bad language and bad anchors on the show

Nivedith Alva, the first director of reality show Roadies has slammed the current season of the show, saying that bad language, abusive anchors and violence were never a part of the show. In a series of tweet, he wrote that the show was supposed to inspire the youths of India; however it has degenerated over the time.

Nivedith wrote, “The MTV Roadies format was created by my brother Nikhil Alva @njalva and was meant to be a show that inspired & united the youth of India to do good and get involved with nation building. It sickens me to see what has been done to the Roadies format over time. Backstabbing, bad language, abusive anchors, violence and in-your-face-sexuality were never a part of the format.” (sic) 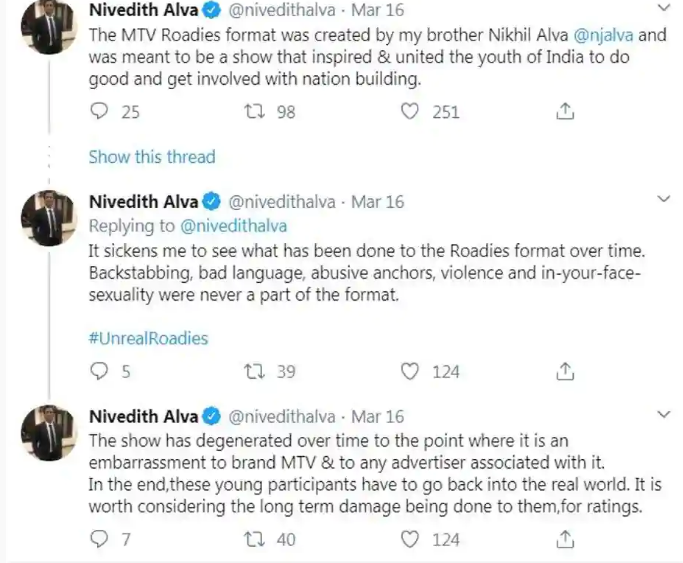 Recommended Read: Neha Dhupia trolled after she loses calm on a Roadies participant for slapping his girlfriend for cheating on him, Twitter says 'guess you are more experienced in it'

He further added, “The show has degenerated over time to the point where it is an embarrassment to brand MTV & to any advertiser associated with it. In the end, these young participants have to go back into the real world. It is worth considering the long term damage being done to them for ratings.” (sic)

The tweets come just days after mentor Neha Dhupia was trolled massively for her comment that having five boyfriends at a time is a woman’s choice. Post that, the actress had to issue a statement on social media saying she has been misinterpreted. She also revealed that her family members have been attacked by the trollers too.

Nivedith was the director of Roadies in 2003.