Advertisement
HomeTELEVISION NEWSTELLY BUZZUser asks Kamya Panjabi why she is remarrying despite having a daughter, gets a befitting reply from best friend Kavita Kaushik

User asks Kamya Panjabi why she is remarrying despite having a daughter, gets a befitting reply from best friend Kavita Kaushik

Television actress Kamya Panjabi recently tied knot with her boyfriend Shalabh Dang (February 10, 2020) in Mumbai. The actress took to her Instagram page to share the pictures and videos of the celebration. After the glimpse, her fans and friends pour several congratulatory messages.

However, one user questioned Kamya’s decision to remarry, despite having a daughter. The user wrote, “You already have 2 children so why you do it ? I mean phir shadi ?” (sic) 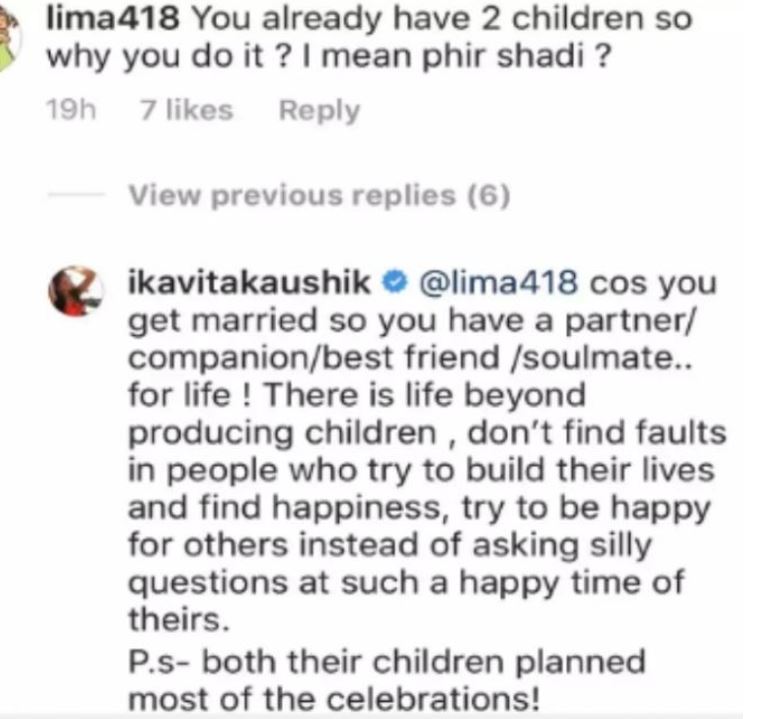 While Kamya did not respond to the troll, her best friend Kavita Kaushik jumped to her defence and lashed out to the troll. She replied to the comment, “@lima418 cos you get married so you have a partner/companion/best friend /soulmate.. for life ! There is life beyond producing children , don’t find faults in people who try to build their lives and find happiness, try to be happy for others instead of asking silly questions at such a happy time of theirs.” She further added that Kamya’s daughter Aara and Shalabh’s son Ishan “planned most of the celebrations”.

Kamya, who was earlier married to Bunty Negi, has a 10-year-old daughter Aara with him. Shalabh also has a son named Ishan from his previous marriage.