Kajol is undoubtedly one of the finest actresses Bollywood has ever received. From comedy to drama and rom-com, she has done it all. While Kajol has several blockbusters to her credit, Dilwale Dulhania Le Jayenge holds a special place in the history of cinema. The romantic drama co-starring Shah Rukh Khan, did not just set the trend right for films of the same genre, but also gave an iconic scene that is still fresh in the minds of all. That is none other than Jaa Simran Jaa sequence wherein Kajol unites with Shah Rukh in the end as the train departs from the station. Taking us down the memory lane, Kajol, who is gearing up for the release of her upcoming film Tanhaji: The Unsung Warrior starring Ajay Devgn in the titular role, recreated the scene on the popular dance reality show Dance + 5.

Kajol who was on the show to promote Tanhaji: The Unsung Warrior, received a request from a participant to enact the scene with him. Agreeing instantly, Kajol slipped into her character of Simran. Remo D'Souza who is the judge of the show, donned the hat of late Amrish Puri. Punit Pathak, a captain on Dance + 5 gave his voice to Remo. The actress, in slow-motion, ran towards the contestant who pretended to be standing inside a moving train. The contestant wooed Kajol by saying Bade Bade Deshon Mein dialogue. Towards the end, Kajol's real-life Raj, Ajay won her heart with flowers. 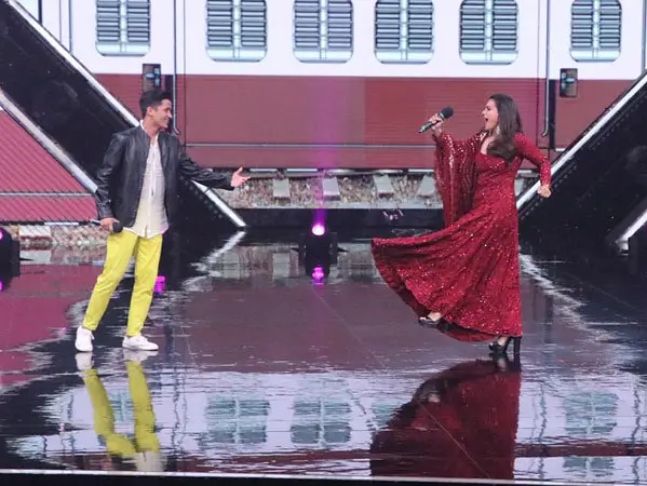 Recommended Read: Ajay Devgn and Kajol promote ‘Tanhaji: The Unsung Warrior’ on the sets of Remo D’Souza’s ‘Dance Plus 5’

Tanhaji: The Unsung Warrior is based on the Battle of Sinhagad in 1670 which was fought between Tanaji Malusare, a commander of Chhatrapati Shivaji Maharaj and Udaybhan. Saif Ali Khan plays Rajput officer, Udaybhan Rathod, who served under Mughal army chief Jai Singh while Kajol will be seen as Ajay's onscreen wife Savitribai. The film is directed by Om Raut and produced by Ajay’s ADF and Bhushan Kumar’s T-Series. It will release on January 10, 2020. The film will be releasing in 3D.