Hina Khan who made a stunning debut yesterday at the Cannes International Film Festival 2019 gave a befitting reply to the film magazine editor who had ridiculed her appearance at the prestigious event. Hina shared a tweet on social media where she called herself a “proud outsider” who will continue to work hard to make her own place.

The magazine editor had commented on her appearance at the Cannes Film Festival and wrote on his Instagram story, “Cannes has suddenly become Chandivali Studios kya?" which drew much ire and anger from a host of TV fraternity members including Ekta Kapoor, Farah Khan and Kangana Ranaut’s sister Rangoli Chandel. 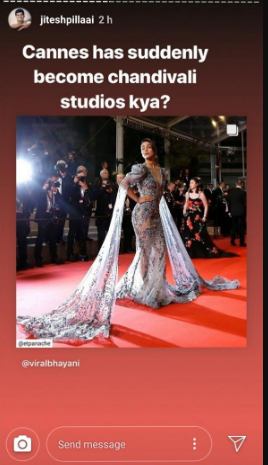 RECOMMENDED READ: Salman Khan defends Hina Khan for her Cannes 2019 appearance, makes a caustic remark against the magazine editor who ridiculed her

I was persistent, I m constant n I will b efficient again n again again. Don’t know where I belong, don’t know if I have to, as d Place don’t define me! Bcause as always I will work my a** off n I will make my own PLACE. My promise,a proud outsider from my Chandiwali studios.

The magazine editor later apologized for his remark and wrote that he was misconstrued. He wrote that he has always been appreciative of talent and his comment meant that Cannes has become Bollywood centric. Check out his apology post below. Hina made a sparkling debut at the Cannes red carpet in a gown by Lebanese designer Ziad Nakad. She will launch the first look of her film Lines and is also a speaker at the India Pavilion fest.