Advertisement
HomeTELEVISION NEWSBIGG BOSSBigg Boss 15: Pratik Sehajpal breaks down after Jay Bhanushali abuses him on his mother, slaps himself

Bigg Boss 15 contestants Jay Bhanushali and Pratik Sehajpal can't see eye to eye. Ever since the show started, they have been at loggerheads on various occasions. Now, in the episode aired on Tuesday, Pratik and Jay came face-to-face once again during the task titled Jungle Mein Khunkhar Dangal. The task was between the junglewasis and the gharwaasis. Soon after the task started, things inside the house took a violent turn when the junglewasis used all their force on the gharwasis. In the middle of this, gharwasis Nishant Bhat and Shamita Shetty got injured.

Gharwasi Pratik noticed that junglewasis Karan Kundrra and Jay tried to block Nishant and Shamita had to intervene. He believed due to the two men, Shamita got injured. He went on to confront Jay. Pratik came out in support of Shamita and threatened Jay that had he been outside the house, he would have beat him badly. Reacting to this, Jay asked Pratik to touch him if he has the guts to do so. Their fight escalated to another level when Jay abused Pratik on his mother. 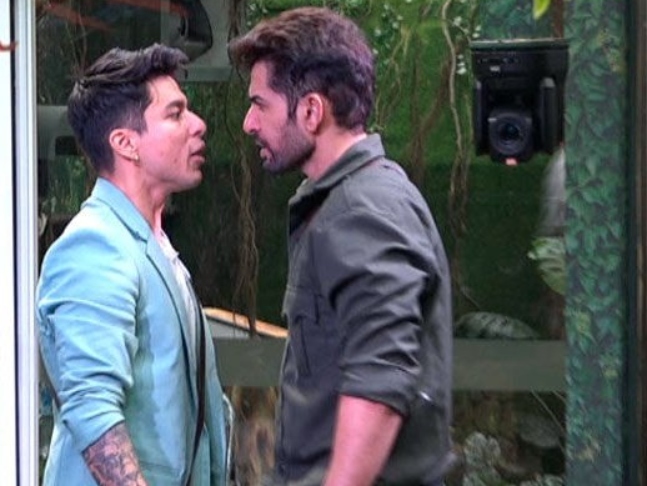 Pratik got offended by Jay's behaviour and warned him. When the latter didn't stop, the former called him 'gawaar' and 'jaahil'. Pratik, who was affected by all this, sat down and crying. He also hurt himself and Shamita tried to calm him down. Vishal Kotian spoke to Pratik, however, he couldn't stop slapping himself hard. Pratik, who was continuously crying, wanted to walk out of the show as he can't take abuse on his mother.

Afsana Khan also consoled Pratik and said she will always be with him like his elder sister. Jay refused to admit his mistake and he found support in Vidhi Pandya. Karan asked Pratik to stay away from Jay. Pratik asked Karan to make Jay understand. Karan told Shamita and Nishant that he and Vishal had planned to talk to Jay. He further said that Jay is very aggressive.