The episode started with Bigg Boss announcing a task wherein the contestants, with mutual agreement, had to name 2 of them who can classify as Rubina's puppets. However, as usual, they couldn't come to a conclusion. Salman also spoke to them about the eviction. 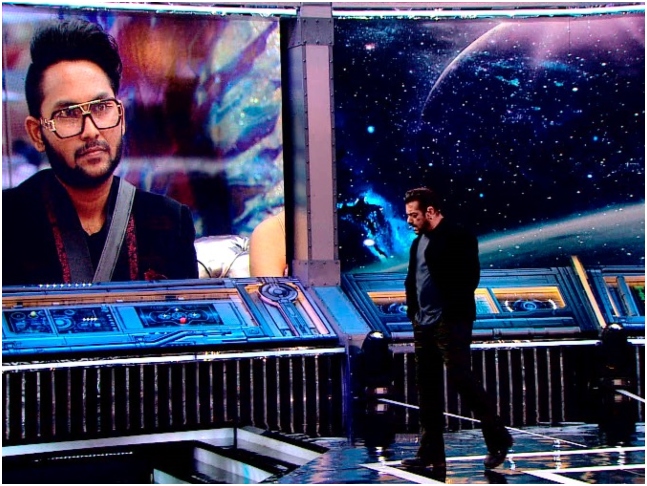 Here are the top 10 highlights from the Day 28 Weekend Ka Vaar of Bigg Boss 14:

- The episode began with the Kathputli task where the contestants had to name those whom they consider being puppets in the house. After Salman intervened and asked them to do the task in front of him, 5 votes went to Abhinav and Rahul each. Rubina said she finds Jaan and Rahul as her puppets. Salman disagreed with the housemates' decision and said Jasmin and Nishant are coming across as puppets.

- Salman addressed the nepotism remark made by Rahul to Jaan. He asked the singer about his first gift, payment of school fees, singing tuitions and other things. The superstar asked Jaan who is a bigger star in the music industry and he named Rahul. Talking about the ongoing debate around nepotism, Salman spoke about his own life and named several celebrities from the industry who became successful on their own merit.

- Talking about Sunil Dutt-Sanjay Dutt, Raj Kapoor-Rishi Kapoor, Salman said, "Will I give my property to someone else, is it possible? Tell me, Rahul, do you like Sanjay Dutt? His father Dutt Sahab launched him but that film did not work as much as Love Story did. But Sanju Baba continues to rule. Did Raj Kapoor do wrong in launching Rishi Kapoor? Was Dharmendra wrong in launching Sunny Deol? They launched their own kid and also launched so many other kids. This new word, nepotism, I did not know its meaning and discovered recently that it is nepotism if you promote someone related to you or offer work to them. But in this industry, it is not possible to survive like that. People only survive on the audience’s love, talent, and hard work."

- The superstar further mentioned how Shah Rukh Khan, Ajay Devgn and Akshay Kumar continue to rule the industry with talent and hard work. "Many big stars tried to launch their kids and invested a lot of money but not only did they lose money, but their offices have also been shut down due to the losses. That happened because the audience did not accept their kids as stars and rejected them. Ajay Devgn is like a brother. Shah Rukh Khan, Akki had no one in the industry but have been ruling for the past 30 years because of their hard work. Even Jackie Shroff. In this industry, only those survive who have something in them. It is not possible here that you impose your child on others," Salman told the contestants.

- Ending the discussion, Salman said, "I understand, it may be wrong if you are forcing your kids on others but that’s not possible here. I had asked my dad to recommend me to a few filmmakers but he clearly told me, ‘If they saw something in you, they’d have approached me… Now, why do you want me to get insulted when they reject you after my recommendation?’ That is when I decided to work hard and make space for myself. Let me tell you, Rahul, this is not a platform to talk about nepotism. Are you suggesting Mukesh Ambani should donate all his property to the Tatas and not his own kids? Have you heard of companies called Ratan Lal and neighbours? No one is here because of lineage, it is because of your own work that you are in the house."

- Moving to Jasmin's and Rahul's fight, Salman reprimanded the former for making a huge issue out of a minor thing. Salman clarified that Rahul wasn't threatening but just warning her. When Salman asked who all believed Jasmin was right, Abhinav raised his hand. Salman then played audio from the captaincy task. It was then clarified that Rahul kept saying ‘please’ and ‘request’ multiple times. Pavitra said that some traumatic experience from Jasmin’s childhood triggered violent reactions from her. Pavitra further added that every person has been through difficult phases in life but that doesn't mean everyone is bad or wants to hurt. Salman asked Jasmin to not stretch a matter and said he wants to see her grow professionally.

- The next on Salman's radar was Rubina. The hosts reprimanded her and busted her myths that the show is all about 'Hinsa'. He slammed Rubina for encouraging Jasmin to throw water on Rahul and said it was unnecessary. As Rubina continued to talk and argue, Salman asked her to run the game show according to her choice. He asked why is their passion can be termed as 'passion' but when others do it, it is called 'violence'. He schooled her for believing that only those people who assure better ratings would be made winners. He said, "Stop blaming Bigg Boss and complete the task. Compete amongst yourselves, not with Bigg Boss."

- The caller of the week spoke to Rubina and raised some questions. However, he couldn't follow any of it and the housemates had a laugh over it.

-Salman, indirectly, spoke about Kavita's and Eijaz's fight over their friendship. However, he didn't delve deeper into the issue.

- Before bidding adieu, Salman asked Kavita to leave the house saying she was eliminated. However, when she was saying goodbye to all, Salman told that he was joking and the voting lines are open till Sunday 10 pm. He asked the contestants to make a vote appeal to the audience. Rubina, Kavita, Jasmin and Nishant asked their fans to vote. Nikki said she will make a vote appeal for Rubina as she is enjoying the game with her in the house.