Bigg Boss 14's star couple Rubina Dilaik and Abhinav Shukla are setting major goals. Be it supporting each other or guiding during tasks, they have been doing it all. While they are showcasing their strong bond in every task, Rubina was heard talking about her proposal to Abhinav. In a recent clip of Bigg Boss 14 Extra Masala on Voot, Rubina, in the garden area, spoke to Jasmin Bhasin about proposing Abhinav on New Year. The actress said that in the first instance, Abhinav gave her a cold and formal response. 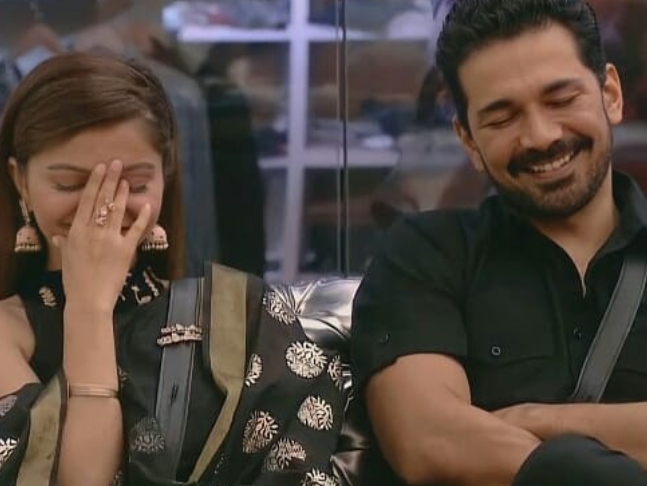 Rubina further added, “Healthy relationship is about receiving and giving mentally, physically, emotionally, spiritually whatever it is, there is a line of respect. Yeh jitna bhi amazing aadmi hai agar humari frequencies match nahi kar rahi iss mamle mein it’s wrong now pushing further. Main retract hui aur firr 3 mahine cut off. Meri bahut achi friend thi she organized a birthday party for me uss mein he just popped up, things became a little fine. November ke around I was flying for an international trip at the airport I hugged him, No matter what, maine har chiz dekhi and I love you for that, halki si upar se aawaz aati hai – Me too."

Abhinav, in a throwback interview with a leading daily, revealed that he fell in love with Rubina after seeing her in a saree during Ganesh Chaturthi celebrations at a friend's residence. Abhinav and Rubina were seen sharing the screen space in Chhoti Bahu. "Let me be honest - I checked her out as she looked resplendent in a saree. What got us together is the fact that we are both thinkers, hardcore travellers and fitness freaks. It’s always good to be with someone who adds value to your life, and she inspires me. What’s attractive about her is that she is pretty and dignified," he told.