(As a tribute to the legendary and charming actor Rishi Kapoor, PeepingMoon is not rating Sharmaji Namkeen)

‘Mere umar ke naujawano, dil na lagana o deewano,’ plays in the background while visuals and BTS shots of the legendary and beloved actor Rishi Kapoor flash on the screen as Sharmaji Namkeen concludes. That’s how Bollywood, his fans and family members should remember him – as fun-loving, a perfectionist in his own sense. and a charming personality. In his swansong, Rishi Kapoor wears the hat of Brij Gopal Sharma, a retired sales manager of a home appliances company.

A widower, he lives with his sons. The elder one (Suhail Nayyar) shares a bitter-sweet relationship with Brij Gopal whereas the younger one (Taaruk Raina) is more invested in his own world of dance. Unable to pass his time post-retirement, Brij Gopal looks out for opportunities that will keep him busy in the absence of his sons. 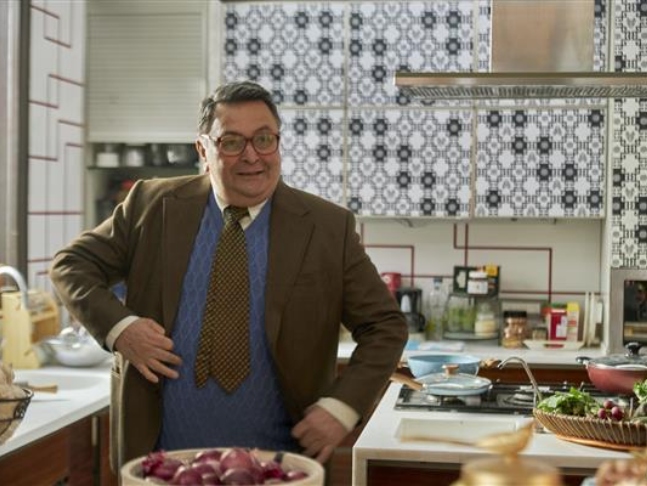 However, one fine day, Brij, who is fond of cooking, gets a catering contract through his friend Chaddha (Satish Kaushik). Reluctant initially, Brij decides to accept it. While he is told that the food will be served to people attending Mata Ki Chowki, Brij discovers that the order is for a kitty party.

After initial hesitance, Brij takes catering orders for kitty parties hosted by a group of middle-aged/older women. His passion for food becomes his livelihood but his sons have no idea about it. Sharmaji Namkeen revolves around Brij and the challenges of his new job.

The story of Sharmaji Namkeen is simple and the beauty of the film lies in its simplicity. The constant bickering between the father and the sons is likeable and relatable. Director Hitesh Bhatia takes a closer look at the retired life of men who often find themselves bored and rather less productive after retirement. To complete the film after Rishi Kapoor’s demise must have been one of the greatest challenges faced by Hitesh but he has sailed through it smoothly. Hitesh, who wrote the film with Supratik Sen, has loaded Sharmaji Namkeen with hilarious punch lines and dialogues. Be it using emotional and dramatic scenes from Baghban to create light-hearted moments to taking a sly dig at the Delhi government, they have kept the script light and easy-breezy. The transition between Rishi Kapoor’s and Paresh Rawal’s scenes are seamless and do not hamper the narrative of the film.

Before bidding adieu to the world, Rishi Kapoor gave his fans a beautiful film to cherish forever. His charming screen presence shall be missed. Carrying forward the film on his shoulder, Paresh Rawal has imbibed all the flavours that Kapoor brought on board. From the Punjabi accent to the character’s body language, he has aced it. Do not miss out on the scene where he explains the difference between Dimsums and Momos.

Suhail Nayyar as Sharmaji’s elder son Sandeep/Rinku does a fantastic job. Taaruk Raina as the younger son is good. However, it is Juhi Chawla who steals the show after Kapoor and Rawal. As Veena Manchanda, one of the kitty party ladies, the actress looks breathtakingly beautiful. Her smile and flawless act leave behind an indelible mark. She ensures that her character provides enough laughs. Satish Kaushik, Sheeba Chadha, Parmeet Sethi, Ayesha Raza Mishra, Isha Talwar and Sulagna Panigrahi do justice to their roles too. 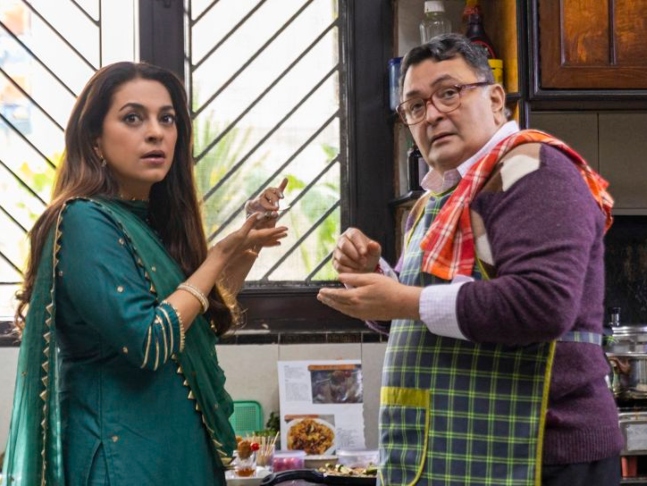 One of the highlights of Sharmaji Namkeen is the recreation of Laung Gawacha. The popular Punjabi song gets a delicious twist as the makers change the lyrics to Laal Tamatar to match the theme of the film.

Jaane se pehle ek aakhri baar milna kya zaroori hota hai? We would say Yes! Meet this side of Rishi Kapoor to pay a tribute to his contribution to Indian cinema.