Film: Army of the Dead

Zack Snyder’s directorial Army of the Dead plays along largely predictable lines showcasing a zombie apocalypse. The film gets Snyder back to his ‘roots’ where he is also the writer and cinematographer of the film and marks his return to his directorial debut the 2004 remake of George A. Romero's 1978 zombie apocalypse classic Dawn of the Dead. However, Army of the Dead isn’t something that you would savour for days to come or even while you’re watching it. It’s a slog film that falters even on the visual front which is rare for Snyder. Army of the Dead revolves around a group of alpha-zombies who are wreaking havoc in and around Las Vegas for a while when the world is already facing a zombie apocalypse. In the present, they are sequestered in Las Vegas with iron grills and shipping containers. Over time, the US president realizes that Las Vegas is a lost cause and decides to take the most American way of any problem-nuke the city. However, the capitalist idea sets in and a billionaire hires a team of mercenaries to retrieve $200 million from a locked vault in one of the casinos before the city is annihilated. It’s an impossible situation behind enemy lines with zombies and a heist added in full measure. The billionaire played by Hiroyuki Sanada ropes in Dave Bautista’s Scott Ward, a battle-hardened man to lead the mission with his hastily assembled team. 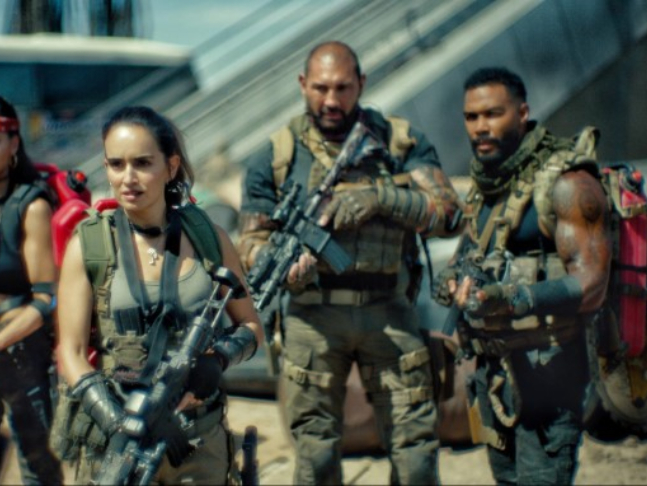 To reveal Scott’s gentle and humane side, Snyder gives him a teenage daughter Kate played by Ella Purnell who also for some god-forsaken reason joins him in the near-suicidal mission. Ana de la Reguera plays Maria Cruz the on-off love interest of Scott, Omari Hardwick as a philosophizing gladiator Vanderohe and Matthias Schweighöfer as a jittery safecracker Ludwig Dieter. Tig Notaro is Marianne, a no-nonsense helicopter pilot who is their ticket out of Las Vegas. Raúl Castillo is Mikey Guzman, who vlogs his zombie kills and Samantha Win couples up as his friend Chambers who shows some spark in the dreary film. Nora Arnezeder plays Lily, who smuggles the team inside Las Vegas. Garret Dillahunt plays Martin, the casino’s head of security. Last but not the least we have Huma Qureshi as Geeta, a refugee trying to get her two children out of Las Vegas. She becomes as much as a heist as the money lying in the vault for the team. 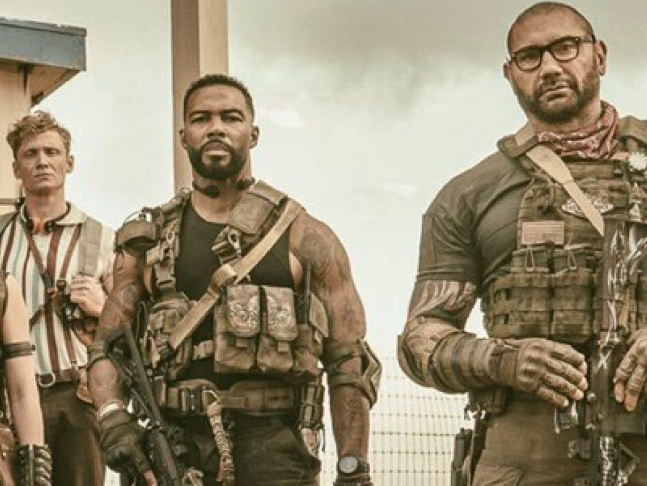 Bautista tries hard to pull off his role but he is pulled down by a weak script and direction. Huma has a very superficial role of a damsel in distress and gives Kate the role of a white savior. The zombies in Army of the Dead have their own rule of law and hierarchy and they are meaner, smarter and faster than all the other predecessors in numerous films. There is a dominant feeling of dread and nervous anticipation right from the start of the film. However, the most fun part of a heist film is the planning and recruiting the crew and how they eventually get the booty with each person’s specific set of skills employed in the best possible way. However, in Snyder’s film that process is hurried and the planning and anticipation of pulling off a seemingly impossible heist does not percolate towards the audience. As for the undead, there is abundance of blood, gore, and ooze to satisfy any zombie aficionado.

Snyder’s film lacks the bite even though a heist amid the zombie pandemic looks good on paper. His zombie film is not even remotely scarring and that in itself is an inhuman crime. What Army of the Dead proves is that giving the zombies some personality and characteristics will not resurrect them from a dying and done-to-death genre.