'And it begins,' says Karan Johar as he kickstarts shooting for 'Koffee With Karan 7'; don't miss the revamped bright orange cup

Karan Johar has kickstarted shooting for the much-awaited seventh season of his iconic chat show Koffee With Karan. The filmmaker-producer gave a glimpse of his revamped bright orange Koffee cup as he began shooting. It is unsure whether KJo is shooting with his first set of guests or just for the initial promos and teasers.

Taking to Instagram Story, Karan shared the cup with 'Koffee With Karan' written on it and captioned it as, "And it begins". Karan had earlier left fans disheartened as he announced the show's end, however, it was later confirmed by him that the show would indeed return with its 7th season but only on OTT platforms Disney Plus Hotstar. Names like Ram Charan, Jr. NTR, Allu Arjun, Yash, Prabhas, Samantha Ruth Prabhu, Rashmika Mandanna, Nayanthara and many more from the South film industry have cropped up as the new guests on Koffee With Karan 7. 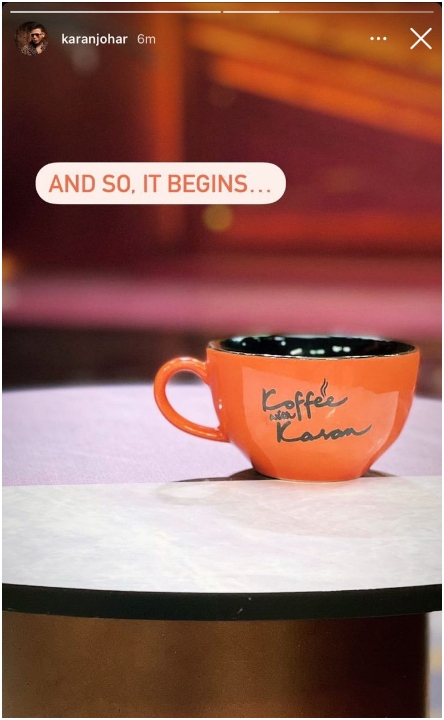 For the unversed, Koffee with Karan is an Indian talk show on Star World India hosted by film producer, actor, and director Karan Johar. The show first aired on November 19, 2004. It is the second-longest-running talk show after Phool Khile Hain Gulshan Gulshan on Indian Hindi-language television. The show concluded its sixth season on March 17, 2019. The 7th season will go on-air on Disney pLus Hotstar soon.