Advertisement
HomeWEBCASTTaapsee Pannu gives a befitting reply to trolls calling her 'She-Man' after 'Rashmi Rocket' trailer, says 'thank you so much for validating my hard work'

Taapsee Pannu gives a befitting reply to trolls calling her 'She-Man' after 'Rashmi Rocket' trailer, says 'thank you so much for validating my hard work'

Taapsee Pannu left her fans impressed once again with the hard-hitting trailer of her upcoming film Rashmi Rocket. The most striking thing about Rashmi Rocket is the way Taapsee has got into the skin of her character, with her perfect athletic body.

But, ever since the actor has been prepping for her character in the film and transformed herself to look like a runner, Taapsee has been subjected to rather harsh comments on the internet for her athletic body. From being called a 'Mard' to nasty remarks of asking her to change her gender, Taapsee had been trolled on the internet for all this. Now, the actress took to her social media and gave a savage reply to all those who objectified her. She wrote, "Heartfelt thank you From yours Truly. But there are many women who actually hear this daily for no fault of theirs. An ode to all the athletes who give their sweat and blood to the sport and their nation and still get to hear this.  #RashmiRocket #AbUdneKaTimeAaGayaHai4"

Heartfelt thank you
From yours Truly.
But there are many women who actually hear this daily for no fault of theirs.
An ode to all the athletes who give their sweat and blood to the sport and their nation and still get to hear this. #RashmiRocket #AbUdneKaTimeAaGayaHai pic.twitter.com/ASTJ2UdkZc

Recommended Read: Taapsee Pannu gives a savage reply to user commenting on her 'Mard Ki Body', takes it as a compliment

Commenting on the objectification during the virtual press conference of the film's trailer launch, Taapsee said,  "Who defines what's feminine and what is not? Is it just about your muscular build that you will be judged on who is a female and who is not? Do you realize that there are some hormonal imbalances that are there in certain females by default, it is not their choice? It might be a result of that they end up having the kind of physique that they have, ”

Earlier this year, actress Kangana Ranaut had called Taapsee a 'She-Man'. Kangana was criticized on the internet for her comment. Kangana responded to an Urban Dictionary ‘definition’ of Taapsee, which called her a ‘member of Pappu Gang’. “Taapsee Pannu is bollywood actress known for her befitting replies. She’s also called as the ‘Sasti Copy’ of Indian superstar and padma shri recipient - Kangana Ranaut. She is also a member of Pappu Gang. Taapsee Pannu is a walmart version of Kangana Ranaut,” the definition read. Replying to it, Kangana wrote, “Ha ha ha She-man will be very happy today.” She added a laughing emoji at the end.

However, after receiving criticism, the actress tried to justify her comment against Taapsee and said, "Being a she man is cheap ? How rude.... I think it’s a compliment for her tough looks ... why you thinking only negative I don’t understand." 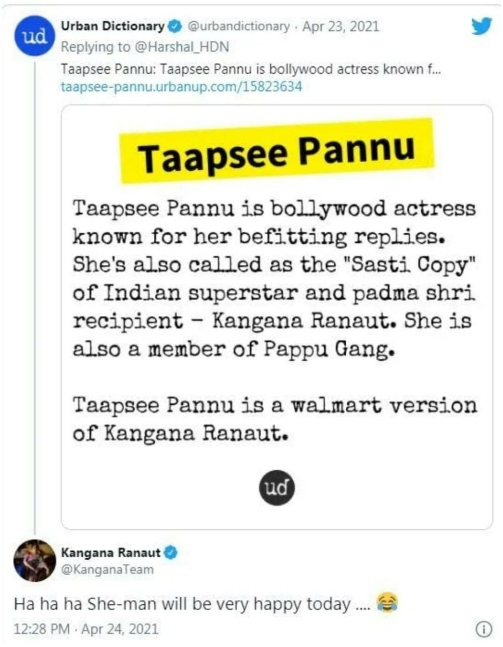 Living up to the movie title, the trailer of Rashmi Rocket showcases an inspiring narrative of its lead protagonist and her journey to become RASHMI ROCKET. The thrilling plot revolves around gender testing on female athletes and how she faces discrimination for not being conventionally feminine.

Hum Do Hamare Do: Kriti Sanon and Rajkummar Rao burn the dance floor i