National Award-winning filmmaker Sudhanshu Saria feels the apology tendered by Ekta Kapoor's production house ALT Balaji following his allegation of poster concept plagiarism is "brazen, disrespectful, inconsiderate", and "smacks of arrogance". Saria had earlier pointed out that the poster of Kapoor's upcoming show "His Storyy" is similar to that of his film "Loev".

Expressing his mind with an emotional outburst during a video interaction with IANS, Saria said: "I have to say my first reaction was numbness and then it knocked the wind out of me. I found myself instinctively so angry that I could not even explain it. This action is brazen, disrespectful, inconsiderate, careless and it is smacks of arrogance. It made me show that I do not matter. They saw the poster, they took it and reused it thinking I am such a nobody in the business that no one would notice who originally created the poster! They thought I am insignificant. I am in the business for last 18 years." Saria also demanded a public apology from the production house to the maker of the original poster.

Bro @altbalaji are you okay? I mean if you need someone to design posters I can help you, I promise it doesn't cost that much pic.twitter.com/YdAGvjqZFj

RECOMMENDED READ: Ripped off without any decency: Plagiarism allegations levelled against poster of Ekta Kapoor's series His Storyy by makers of Indie film LOEV

On Sunday, ALT Balaji put out a statement on social media that reads: "On the 9th of April, we released a poster of His Storyy and were made aware of the existence of Sudhanshu's ‘Loev' poster. The uncanny resemblance and similarity cannot be written off as a mere coincidence. It has been an oversight on part of our design team. For this, we apologise. We respect the creativity of every designer and would never intentionally lift their work nor disregard their talent. Thus, an apology to the artists involved in the making of this poster is warranted. We have deleted the poster from all our platforms and we humbly apologise to the artists involved in the creation of the beautiful poster of ‘LOEV'." 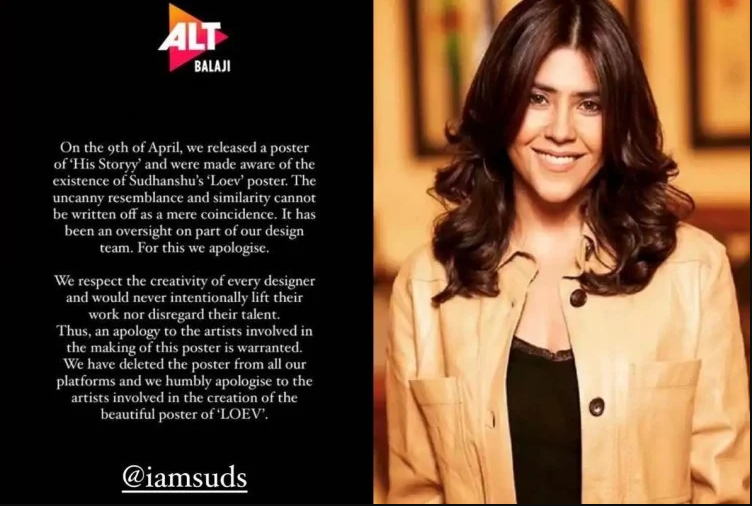 However, Saria said: "There are few points to be noticed here, when it comes to ALT Balaji putting out a statement with their apology. Firstly, on social media, they did not tag or mention the name of the poster artiste who authored the poster. In the apology, they said that they only became aware of the existence of the poster on April 9th. I find that to be insincere and not truthful because the photographer of the poster said to us that he shot it two months ago. This means everyone on the set, including actors and the photographers are well-aware of the existence of the poster. Clearly, creative briefs were given and a team of people must have processed it to execution. This is not the only time when this production house has done this. In fact, the very name of the show 'His Storyy' is ripped off from a Korean show."

"It is a culture in that production house, clearly. Instead of acknowledging that and promising to change it, instead of apologising to the artiste directly, they just put up this courtesy statement. I know I am supposed to be satisfied because at least they apologised but, no, I am not satisfied. We want to kick start a larger discussion on the whole matter," Saria added.

LOEV featuring Shiv Pandit, was directed and produced by Saria, and it released in 2017 after few rounds of festival screening. It streams on Netflix. Saria won the National Award as Best director on March 22 for his new non-feature film titled Knock Knock Knock.

After 16 years, Nausheen Ali Sardar and Anuj Saxena's Kkusum to get a