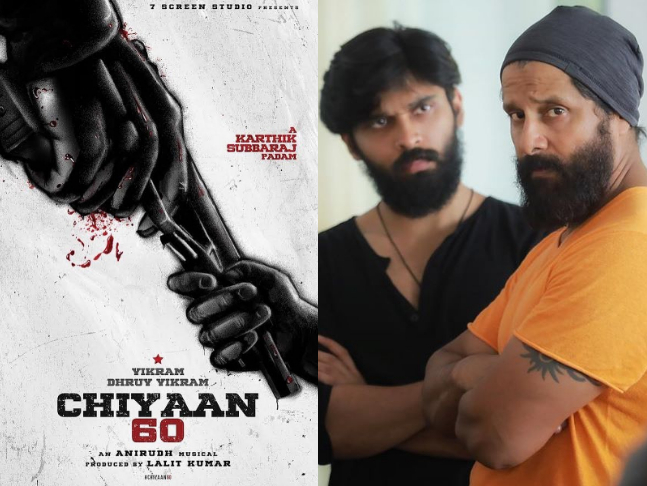 Tamil actor Vikram has officially confirmed his next venture with Karthik Subbaraj’s upcoming film which is tentatively titled Chiyaan 60. The official announcement was earlier teased by Chiyaan Vikram’s son Dhruv Vikram on his Instagram stories as he wrote, “Watch this space." Now, the film has been confirmed wherein Vikram and Dhruv will share screen space for the first time.

The film’s teaser poster was unveiled today by Karthik and Dhruv on social media. Dhruv wrote, "I’ve always been excited to watch a Karthik Subbaraj film’s FDFS.
I’ve always listened to Anirudh’s albums on loop. I’ve always been my dads biggest fan. If this is my dream come true, please don’t wake me up! @7screenstudio @anirudhofficial @ksubbaraj @the_real_chiyaan."

I’ve always been excited to watch a Karthik Subbaraj film’s FDFS. I’ve always listened to Anirudh’s albums on loop. I’ve always been my dads biggest fan. If this is my dream come true, please don’t wake me up! @7screenstudio @anirudhofficial @ksubbaraj @the_real_chiyaan

The poster shows a man holding a revolver whose barrel is gripped by a young child. As per reports, Vikram will be seen playing an aging gangster while his son Dhruv will play his younger version. The poster is splattered with blood that depicts film’s hard-hitting nature.The film will have music by Anirudh Ravichander and will be bankrolled by Lalit Kumar under his home banner Seven Screen Studio. Karthik recently wrapped up Jagame Thandhiram that stars Dhanush in the lead.

Happy to announce that my next directorial after #JagameThandhiram is.... 'CHIYAAN60'#Chiyaan60

And it will be an @anirudhofficial musical..

So excited for this film.... pic.twitter.com/Oof0je5Eg4

On the other hand, Vikram will be next seen in Cobra directed by Ajay Gnanamuthu. He will also star in Mani Ratnam’s upcoming film Ponniyin Selvan that has Aishwarya Rai Bachchan in the lead along with Trisha Krishnan, Karthi, Jayam Ravi and others. The film is based on the Tamil novel of the same name written by Amarar Kalki.