Did Trisha take a dig at her ex-flame Rana Daggubati with ‘Narcissistic Psychopaths’ post?

Tollywood heartthrob Rana Daggubati has been making headlines for his roka ceremony with ladylove Miheeka Bajaj who is a businesswoman. The adorable couple has been showered with congratulatory wishes from friends, fans and family. However, with every love story culminating into a wedding there are quite a few that goes kaput and staying friends with your ex is a challenging and not so pleasant task. Perhaps that’s what happened with South Indian actress Trisha Krishnan whose recent cryptic Instagram story made many people believe that she is taking a dig at Rana.

The post reads, “People who keep the exes as close friends are more likely to be Narcissistic Psychopaths.” She captioned the image, “I knew itt.” Later the actress removed the post but fans of the actors came up with speculations that her post was hinting at Rana. 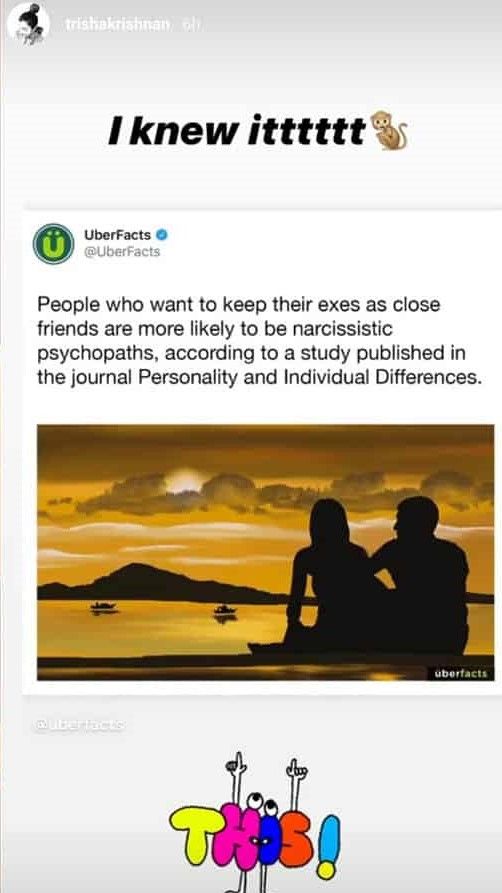 RECOMMENDED READ: 'She was my cousin sister's classmate, the decision to marry her happened pre-lockdown,' says Rana Daggubati about fiancée Miheeka Bajaj and agrees he found the 'strangest time to get married'

Rana and Trisha kept their romance under wraps and always maintained that they are just friends but in season 6 of Koffe With Karan, Rana confessed that the two had dated for a while but things didn’t work out between them and they parted ways but remained friends. He had said, “She has been my friend for a decade. We have been friends for a long time and even dated. But, I guess, things didn't work out."

During the same interaction, SS Rajamouli had said that he thinks Rana will get married first. He had said, “Rana is so structured. Everything has to be broken into structures and pieces for him. His whole life is like 1-10 years, 10-15 years, 15-20 years. Marriage is an aspect, a box to be ticked. That will get ticked. I don't know whether it will last."

Grow up: Samantha Ruth Prabhu lashes out at reports accusing her of sp

I am getting married to love of my life: Vignesh Shivan confirms tying the knot with Nayanthara on June 9