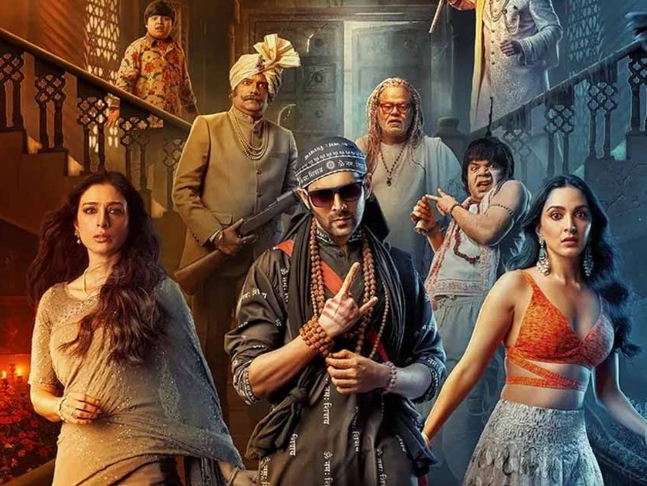 Horror and comedy, according to me, are the most entertaining yet complex genres. You need to get it perfectly in place to make an impact on the audience. One of the finest examples of horror-comedy in India is Bhool Bhulaiyaa (2007). Now, taking the franchise ahead, Anees Bazmee directed its sequel which releases in theatres today. Bhool Bhulaiyaa 2 stars Tabu, Kartik Aaryan, Kiara Advani, Rajpal Yadav, Sanjay Mishra, Ashwini Kalsekar, Rajesh Sharma and others in key roles.

Bhool Bhulaiyaa 2 releases 15 years after its predecessor. The story is set in a similar world but it is not the traditional sequel you are expecting. This time, the plot is centred around Reet (Kiara Advani), a medical student who is heading home for her marriage. She hails from a small town in Rajasthan called Bhawanigadh (inspired by the haunted village of Bhangarh?). While she is on her way, she meets Ruhaan (Kartik Aaryan) and they instantly grow closer to each other. 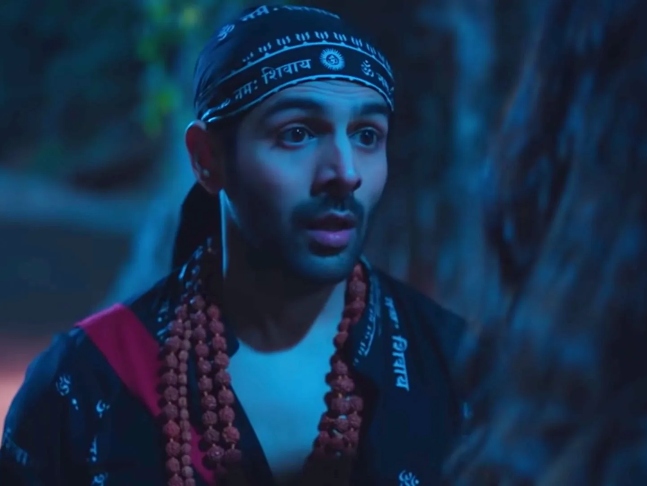 Thanks to Ruhaan, Reet narrowly escapes a bus accident. She decides to take him to her ancestral haveli in Bhawanigadh where the major happenings unfold. Reet has fond memories of the haveli which was isolated by her family members after Manjulika’s ghost was taken captive 18 years ago. As Reet and Ruhaan accidentally unlock the most dreaded room in the haveli, mysterious and paranormal activities unfold gradually.

Ruhaan, who himself has never encountered any ghosts, disguises himself as Rooh Baba, an expert in a séance. People start believing in him and his extraordinary powers and this comes across as a threat to a Pandit (Sanjay Mishra) and his wife (Ashwini Kalsekar). While Rooh has only heard of Manjulika, what will happen when he has to deal with her spirit? Bhool Bhulaiyaa 2 will take you on a ride filled with entertainment while answering this.

Anees Bazmee is undoubtedly a master storyteller. His command over the comedy genre is known to all and this time when he ventures into horror-comedy, he hardly disappoints. Retaining the atmosphere of Bhool Bhulaiyaa (a psychological horror-comedy), Anees has opened to door to multiple possibilities in the future under this franchise. As a director, all eyes are on him as he has taken up a huge responsibility by carrying the baton of Bhool Bhulaiyaa ahead. He lives up to all the expectations without hampering the sanctity of the previous film. Yes, while I applaud Anees for the humour in Bhool Bhulaiyaa 2, I must also admit that there are barely any spooky moments. Having a penchant for horror, I expected more scares than laughs and an atmospheric spookiness, an aspect that was present in Bhool Bhulaiyaa throughout, even when Akshay Kumar was at his hilarious best. On the horror front, the makers take the old route – white-faced ghosts with ulte pair, unruly hair and crows cawing at night.

If you have reached this paragraph, you must be wondering why haven’t I mentioned Tabu anywhere above. No, I haven’t forgotten her. Nobody can ever after watching Bhool Bhulaiyaa 2. Tabu has done Golmaal Again, a Rohit Shetty horror-comedy. But this time, she has taken her own bar of brilliance way higher. Kartik and Kiara might be the faces of Bhool Bhulaiyaa 2 but it is Tabu who makes it a repeat watch even after the mystery is unraveled. Killing us a million times with her eyes and body language, the actress' stupendous performance shall be remembered for centuries.

Kartik, known for his comic timing, displays a different side of his acting craft. As usual, he nails the comedy portion but wait until you watch the climax. I promise you shall see a completely different and compelling side of ‘actor’ Kartik. As shown in the trailer too, Kartik has a performance on Aamhi Je Tomar (a hauntingly beautiful male version) and what an act! Spectacular Kiara looks perfect in every single frame and does a good job as Reet. We really wanted to see more of this talented starlet. The lead cast of Bhool Bhulaiyaa 2 is ably supported by veterans like Sanjay Mishra, Rajpal Yadav and Ashwini Kalsekar. I cannot get over Rajpal’s dialogue –“Isse accha Bigg Boss mein chala jaata, beizzati ke paise toh milte!” Take a bow, Rajpal. Sanjay, despite a splendid performance, gets a typical role. You have seen him do it before too. In a brief role, Ashwini shines. Rajesh Sharma, who was also a part of Akshay Kumar’s Kiara’s Laxmii, is only utilised for humour and he does deliver it in his best capacity.

All good, all perfect. But I have a problem with Bhool Bhulaiyaa 2. Why did it even have to stereotype Bengalis as kala-jaadu experts? Black magic, as much as I am aware, is practised in many different parts of the country and not every corner of Bengal has a black magician. I am also done with people assuming kala-jaadu experts are women who are super jealous of their contemporaries. It is high time to stop this categorization.

The cinematography of Bhool Bhulaiyaa 2 is top-notch and so is the production design. The music is more or less similar to the original film. The songs are misfits. As stand-alone songs, they are enjoyable but don’t blend easily into the plotline. The runtime could have been slightly shorter. The VFX used throughout could have been better and it does get shoddy and clichéd at regular intervals.

Bhool Bhulaiyaa 2 cannot and must not be compared with the first one. It is an injustice to both. Since I cannot reveal much of the story, I would love to suggest –go to your nearby theatre and savour this delicious cocktail of humour and entertainment without any preconceived notions.