Ashutosh Gowariker is back with yet another period drama, Panipat. His much-anticipated film is larger than life and beyond all expectations. Starring Arjun Kapoor, Kriti Sanon and Sanjay Dutt in the lead, the film is based on the Third Battle of Panipat, which was fought between the Marathas and Afghan invader Ahmed Shah Abdali in 1761. The magnum opus, which is based on historical facts, takes some creative liberties along the way and leaves an impact. The enthralling film salutes the bravery of Marathas and takes the audience on a never-seen-before journey.

In the 18th century India, Sadashiv Rao Bhau, commander-in-chief of the Maratha army, leads his force in the Third Battle of Panipat against Ahmad Shah Abdali, the king of Afghanistan. Panipat packs in a layered narrative that delves into the complex politics of the period, the intricate workings of war strategies versus might and the importance of forming alliances. Sadashiv Rao Bhau (Arjun Kapoor) is an able commander in his cousin Nanasaheb Peshwa’s (Mohnish Bahl) army. After a victorious battle against the Nizam of Udgir, Sadashiv Bhau is chosen by the Maratha Peshwa to lead their army to Delhi with the support of his wife Parvati Bai (Kriti Sanon). Ahmad Shah Abdali (Sanjay Dutt), the king of Afghanistan, sets his inroads into India after forming an alliance with Najib-Ud-Daula (Mantra) with the intention to defeat the Marathas and curb their expanding power. The film has a huge supporting cast featuring Mohnish Bahl, Padmini Kolhapure, Nawab Shah, Mantra and Zeenat Aman among others. Recommended Read: From wearing an armour weighing 18-20 kgs to facing unfair comparison with Bajirao aka Ranveer Singh, Arjun Kapoor finds 'Panipat' to be a 'beautiful experience'

Sadashiv Bhau’s strength, valour and resilience is inspiring. Parvati Bai is as powerful as her better half in this epic battle. Ahmad Shah Abdali, on the other hand, is fierce, dangerous and scary. The film showcases the true spirit of the Maratha Empire that protected India for over 100 years. It also presents a heartwarming tale of Sadashiv Bhau’s love story with Parvati Bai against the backdrop of the battle that changed history.

The first half of Panipat is engaging. From the performances, execution, narrative to the visuals, everything is on point. The first half is fast-paced; but it is the second half that steals the limelight. And even after have a run time of 2 hours 51 minutes, Panipat manages to engage us perfectly. Arjun as Sadashiv has done a decent job and all credit to the actor for being able to carry the glory of his role to perfection. Kriti is the surprise package in the film. The film, which begins with the actress’ voice-over, ends with her. Brilliant is the word for her performance. Kriti truly owns the film with her confidence and screen presence. In fact, her chemistry with Arjun as their love story develops is one of the high points of the film. Sanjay is the main man. The actor owns each and every scene that he is a part of with much excellence. He channelizes a menacing act effectively. The supporting cast - Mohnish Bahl, Padmini Kohlapure, Zeenat Aman (special appearance) add to the vibe of the film and makes it worth a watch. 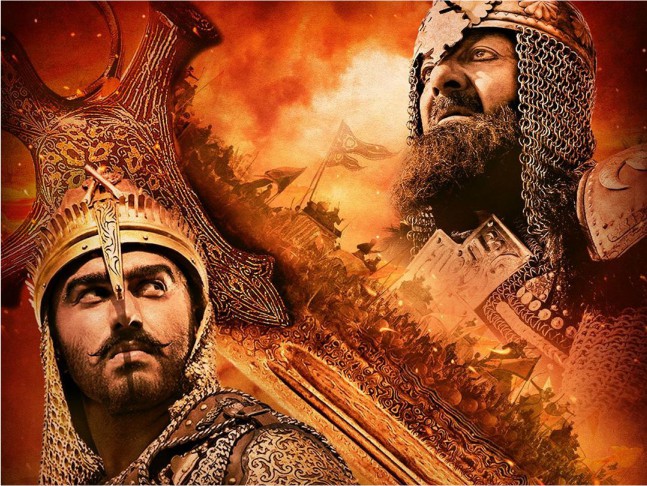 The film has been mounted on a lavish scale and it comes through in almost every scene. The costume design by Neeta Lulla could not have been better. The sets and production design are spectacular and stand out. The songs by music composers Ajay-Atul add to the mood and are well choreographed. The final battle scene induces goosebumps. As always, Ashutosh Gowariker has done a commendable job. The cinematography, sound design and the visual effects also blend in seamlessly to give an authentic setting to this period drama. A film which will make each and everyone say ‘Hara Hara Mahadev’ with full pride.