Super 30 Review: Hrithik Roshan is 'super' in this good watch

Super 30, a film that has had a long struggle with its story and its subsequent release, is finally in the theatres. The film is directed by Vikas Bahl who was accused of sexual harassment and eventually led to the dissolution of Phantom Films. The team had decided not to give Bahl the credit but he eventually has that in the film. Based on the life and times of genius mathematician Anand Kumar, this Hrithik Roshan, Mrunal Thakur and Pankaj Tripathi starrer has some low moments but proves to be a good watch, nonetheless.

First, there is Hrithik Roshan, the hero, everyone deserves. Hrithik's superstardom is nowhere to be found as he completely hunkers down and becomes the average man from Patna. The film makes incredibly strong commentary about poverty in India and the divide between the haves and have-nots. Hrithik's powerful depiction of Anand Kumar – the mathematician/magician who coached underprivileged kids - creates a hero's aura in all the right places. The feel-good factor is placed creatively and sparsely in the narrative of the film in order to highlight that the film is, at the end of it all, about hope in the darkest of times. 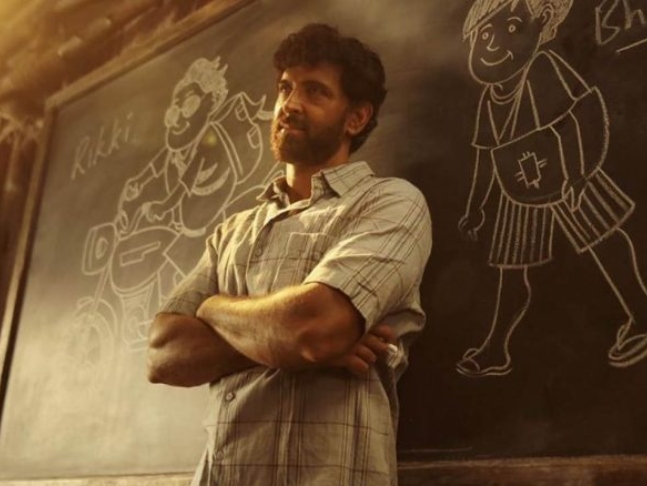 Hrithik Roshan in a still from Super 30

But here is the downer! If you thought you'd heard the worst make-believe accent when Anushka Sharma did the Gujju inflection in Jab Harry Met Sejal, you were wrong. Hrithik Roshan's Bihari accent is far worse. Strangely it has no bearing on the film itself. Where Anushka Sharma's accent in Jab Harry Met Sejal left a jarring impact on the entirety of the movie, Hrithik Roshan's not-so-great Patna inflection is a small error in Super 30.

The film begins with Vijay Raaz narrating the story of Anand Kumar, the man who helped him achieve various laurels despite being at a great socioeconomic disadvantage. Told with squarely keeping Anand’s poverty at the center of the film's conflicts, the plot has predictable highs and lows but eventually, the payout does make its impact, owing to Hrithik's beautiful performance as the protagonist. Accent notwithstanding, Hrithik gives the role his all and succeeds evoking the right emotions. At no point does he create a swagger to convince the world of Anand's genius. Hrithik's greatest achievement here is being able to stand as a hero without going overboard, especially considering the fact that the film was purely for Bollywood's palette.

The tearjerker factor is solely on Hrithik's credit. Spoiler alert - some of the age-old clichés of the dead father and rags to riches slumdog billionaire schticks are peppered in for the most part. It is perhaps the shades of grey added in Anand's character, how he happily decides to part ways with his girlfriend (played sweetly enough by Mrunal Thakur) and decides to earn the easy buck once the opportunity presents itself, that makes the film interesting. Hrithik Roshan and Mrunal Thakur in a still from Super 30

So what’s the final verdict? Super 30 anchors and succeeds solely because of Hrithik's grounded performance. Pankaj Tripathi is yet another treat as he plays the corrupt politician with brilliance and ease. There aren't any clear cut heroes despite it being all about a larger than life story. There are no big dance numbers (not a lot anyway) where the hero is almost invincible. In fact, it tells you the important tale of being your own hero. You can definitely show this film for a motivational class and if you're a Hrithik Roshan fan, you'll definitely cherish this.