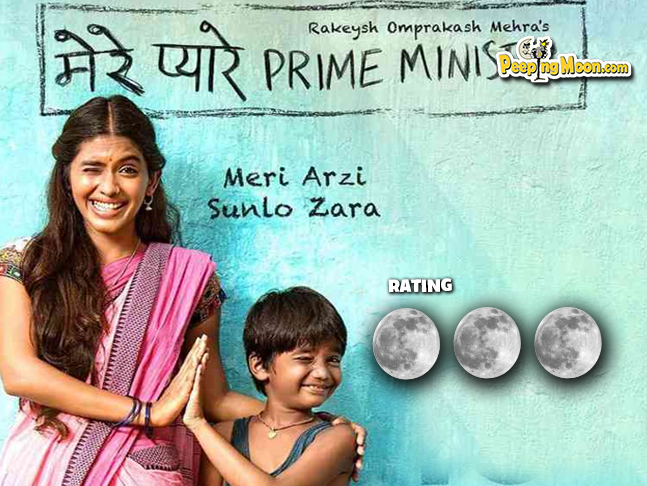 Rakeysh Omprakash Mehra’s Mere Pyare Prime Minister is the story of a slum kid determined to campaign for a public toilet so that his mother and other women do not have to squat in the open. This, when his mother gets physically violated while returning from answering nature’s call one morning. He takes it upon himself to construct a toilet for her. The Akshay Kumar-Bhumi Pednekar hit Toilet: Ek Prem Katha was about women’s dignity and breaking superstitions, Halkaa was about human dignity at large and Mere Pyare Prime Minister is about women’s safety. However, the film suffers in the storytelling department.

It features a carefree preteen Kannu/Kanhaiya (Om Kanojiya) who assists a newspaper vendor and spends his time goofing around with his slum buddies and pushing dubious drugs. His mother Sargam (Anjali Patil) is a struggling single mom. Kannu with the help of his friends takes up the challenge to convince the government to build toilets for them; the process is long and daunting. When they are faced with politics at the municipal level they decide to take the issue to the highest level.

RECOMMENDED READ: Mere Pyare Prime Minister: Rezgaariyaan song shows life on the other side of the street

Kannu is told by an official in the municipal corporation that only the Prime Minister can help and proceeds to pen a letter to the PM. It leads him and his friends to board a train to Delhi to deliver it in person. This journey is one of the finest scenes of the film and brings out the best in the cast. However, the film fails to maintain its pace and direction and the storytelling is erratic.

It also fails to maintain its emotional and sensitive gaze and Kanojiya is not as dynamic as the many child actors that have recently debuted on the big screen. In fact, his friends Prasad Sawant and Adarsh Bharti overpower him in scenes with their sharp wit and terrific screen presence. The scene stealer is Syna Anand who plays Mangla. She impresses in a brief role and is a riot when she reveals to Kannu’s mother where Kannu is off to. This scene is the high point of the film both in terms of writing and acting.

The two main adults of Mere Pyare Prime Minister, Sargam and her friend Pappu (Niteesh Wadhwa) impress with their quiet performances. Anjali comes across as sensitive while Niteesh is understanding and accommodative. Rasika Agashe has a small role but is also good. A film that has child artistes at its heart should have been written with more wit, care and understanding and Mere Pyare Prime Minister fail to live up to the benchmarks set by recent children films. At some points, it reminds of Slumdog Millionaire. However, the film provides a good feeling and you can't help but champion Kannu’s cause.