Recently, Timothée Chalamet’s and Lily-Rose Depp’s kissing picture clicked by paparazzi went viral for well, not very cool reasons as netizens believed that they needed some practice on the time-honoured art. Now, joining their league is Shawn Mendes and Camila Cabello who shared a very tongue-in-cheek Instagram video.

In the video, that Shawn posted on his Instagram account, the couple addressed the criticisms of their supposedly ‘fish-like’ kissing style where they keeping missing each other’s mouths. In the video, Shawn says, “We saw, like, on Twitter, you guys saying stuff about the way we were kissing and how it looks weird…like fish.” To which Camila added and said, “Really hurt our feelings.” However, they proceeded to once again exhibit some weird kissing maneuvers where they kept missing each other’s mouths several times before employing some increasingly vigorous tongue action.

RECOMMENDED READ: 'We're always going to love each other', says Camila Cabello as she shares a kiss with Shawn Mendes

The video lit up the internet with people commenting on it. Check out some of the tweets below:

My whole tl watching that shawn and camila video pic.twitter.com/FfJvhxoDC9

IF Y’ALL DON’T STOP TWEETING THAT VIDEO OF SHAWN AND CAMILA PLS MY EYES pic.twitter.com/YvLEDkpstc

current state of the unions i hate: camila cabello and shawn mendes trying to outdo lily and timothee's awful venice kiss is so absurd i love it. dance, my puppets, dance.

Some of the celebrities also commented on the video like Justin Bieber, Niall Horan and Charlie Puth. 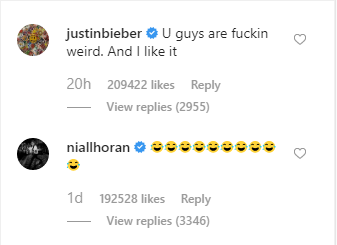