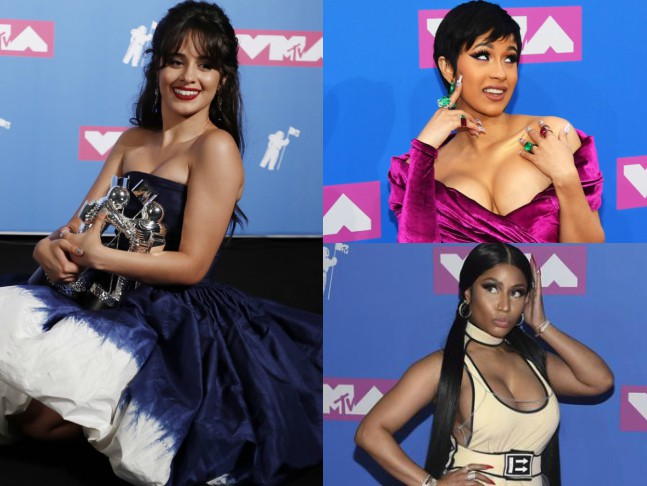 Havana hitmaker Camila Cabello won the Moon Man trophies for Artist of the Year and Video of the Year for the song at the MTV Video Music Awards (VMAs), where Jennifer Lopez won the coveted Michael Jackson Vanguard Award for lifetime achievement. Cabello was contending with rapper Drake and singer Childish Gambino. During her speech, the former Fifth Harmony singer gave a "shoutout to all the amazing female artists this year", reported theguardian.com.

The gala was kicked off by rapper Cardi B appearing onstage announcing herself to be "the empress" before introducing a performance by singer Shawn Mendes. It was a muted start for the VMAs following on from last year's politically charged opener from rapper Kendrick Lamar. Cardi B picked up awards for Best Collaboration with Jennifer Lopez and DJ Khaled and Best New Artist. "A couple of months ago people were saying you were gambling your career by having a baby," she said.

Singer Madonna, who was wearing traditional African clothing, paid a tribute to the "Queen of Soul" Aretha Franklin, who died on August 16. The ceremony did not include a much-expected musical homage, but instead, Madonna came onstage to share a story about how singing You Make Me Feel (Like a Natural Woman)" at an audition changed her life. But her tribute to the late star proved unpopular with many.

Avicii won a posthumous MTV Video Music Award for best dance song alongside Rita Ora for their collaboration Lonely Together on Monday. The electronic artist died earlier in April in Oman at the age of 28.

Gambino's This is America was named best video with a message and was honoured with prizes for choreography and direction. Musician Logic, who performed "1-800-273-8255", named after the US suicide hotline, arrived onstage wearing a T-shirt saying "**** the wall", followed by children wearing T-shirts saying "We Are All Human Beings". The stage, mocked up to resemble the border wall, proceeded to lift halfway through One Day, his duet with Ryan Tedder, to reunite the children with their parents.

The event saw a dash of unique fashion too as Amber Rose dressed like a she-devil and Algee Smith like a circus ringmaster in fire-engine red Moschino.