Dior recently unveiled its AW2021 haute couture collection with a short film and a miniature twist, and it was surely a refreshing change to witness. However, it seems like this collection, virtually launched at the digital Paris Fashion Week did not go down smoothly with many!

Anonymous fashion police Diet Prada called out the French luxury house for the lack of diversity in its released short film based on Greek mythology.

Finding the lack of POC odd because Maria Grazia Chiuri’s @Dior shows are more diverse than this. Her last one featured over 30% models of color. This film with Matteo Garrone, an Italian male film director, is also outside her norm of collaborating with female creatives. In the past she’s worked with Chimamanda Ngozi Adichie, Judy Chicago, and Grace Wales Bonner, to name a few. Resort 2020 even featured textiles in collaboration with Uniwax, which toed the uncomfortable line between cultural appropriation and appreciation. In a statement from Dior, they reinforced Chiuri’s values of diversity and inclusion. What it also revealed is that the director was given full creative control. “For this specific film which was shot in and around Rome, the filmmaker Matteo Garrone wanted to explore and to revisit several Greek myths… [Garrone] was given free rein to celebrate this artistic richness,” the statement read. Surely then, it was possible to honor Greek mythology and still cast people of color. Would it have been too revisionist? Tales of Ethiopia as a mythical land are recorded in Greek literature dating as early as the 8th century B.C., including the work of Homer. Several figures in Greek myths were also believed to be black, most notably Memnon, an Ethiopian warrior king whose skill was likened to Achilles. Racism of course, is an entirely modern social construct. Frank Snowden, an emeritus Howard University classicist, said that "nothing comparable to the virulent color prejudice of modern times existed in the ancient world.” It goes without saying that antiquity is not immune to whitewashing and racist portrayals. In an article for Forbes, art historian Sarah Bond spoke frankly on the matter. “We have known for a long time that we have a diversity problem, and one way to address this might be to emphasize what an integral part people of color played within ancient Mediterranean history. But the onus is also on the media and fashioners of popular culture.” Dior’s statement also made no mention of logistical issues with bringing in talent of color, so what was really stopping them from reflecting their said values? #dior

DP shared a post on its social media space stating that Dior shows by Maria Grazia Chiuri are generally more diverse than this and so they found this film lacking POC (people of colour) odd. “Her last one featured over 30% models of color. Resort 2020 even featured textiles in collaboration with Uniwax, which toed the uncomfortable line between cultural appropriation and appreciation,” read an excerpt from its post.

Diet Prada also called out the film’s director Matteo Garrone who was given full creative control and independence as per Dior’s statement. “It was possible to honor Greek mythology and still cast people of color,” the fashion police quipped. As per the fashion’s anonymous vigilante, several figures in Greek myths were also believed to be black. 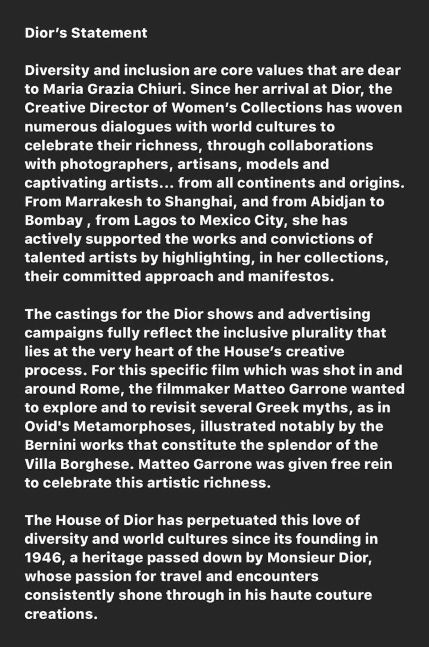 Coming to Dior’s statement, DP stated that it made no mention of logistical issues in terms of bringing the talent of color. ‘So what was really stopping them from reflecting their said values?’ it asked.

What are your thoughts on this one?