Advertisement
HomeFASHIONNewsHave been taken off stage for my costumes: Singer Neha Bhasin opens up on being shamed for her outfits

Singer Neha Bhasin, who is best known for her tracks Nai Jana and Dill diyan gallan, has opened up about the days when she was slammed by people for talking about butt in her song Apple bottoms. "Another #throwbackthursday 2010 My album Tabaah, song #Applebottoms Gosh itni galiaan aur gandhi baatein mere baare mein hui thi because I made a song about my butt.

"Today all rappers are talking about our whole body and people are loving it," she wrote on Instagram.

Another #throwbackthursday 2010 My album Tabaah, song #Applebottoms Gosh itni galiaan aur gandhi baatein mere baare mein hui thi because i made a song about my butt. Today all rappers r talking about our whole body and people are loving it #nehabhasin

Recommended Read: We made peace with him: Paras Chhabra FINALLY settles the dues of ‘Bigg Boss 13’ designers Taashi & Co

Reacting to the post, singer Meiyang Chang spoke about the hypocritical nature of people. 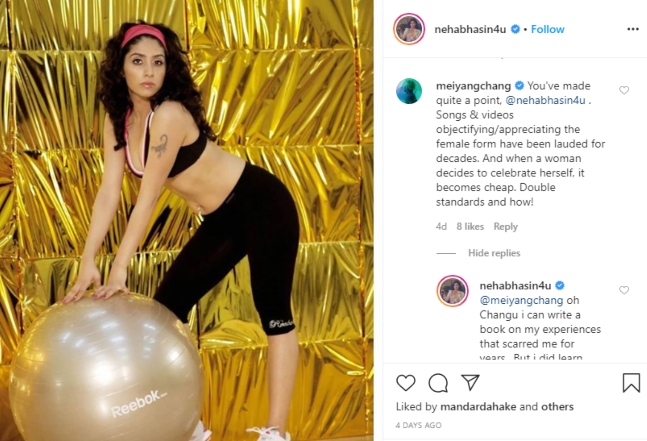 He commented, "You have made quite a point. Songs and videos objectifying/appreciating the female form have been lauded for decades. And when a woman decides to celebrate herself, it becomes cheap. Double standards and how!" Responding to Meiyang's comment, Neha shared her scary experiences of getting shamed by people for costumes. "I can write a book on my experiences that scared me for years...But I did learn with time I have to look ahead and be unapologetic. Growing up has its plus points. I teach my nieces to be strong...We don't instill gender awkwardness in them. "I have been taken off stages for my costumes and shamed for it. And it was acceptable to even six years back," Neha added.

From slowing its pace to restricting carbon footprints, BFC and CFDA j

I'm a sucker for baggy fits and crazy prints: Vijay Varma on his love for the '90s fashion

Lizzo's collab-collection with Quay sunglasses are finally here and they have a social cause!