Advertisement
HomeFASHIONNews'Just accepted them as a little gift from Stormi', beauty mogul Kylie Jenner talks about her stretch marks and post pregnancy phase

'Just accepted them as a little gift from Stormi', beauty mogul Kylie Jenner talks about her stretch marks and post pregnancy phase

Reality TV personality Kylie Jenner says she's finally accepted her stretch marks by thinking of them as "a little gift" from her daughter Stormi. Kylie, 22, welcomed her daughter in February last year, with her former partner and rapper Travis Scott.

Jenner said she'd always wanted to be a young mum, and told fans she's accepted the changes pregnancy made to her body, reported mirror.co.uk.In a question and answer session with her fans, Kylie opened up about accepting her post-pregnancy body. One fan asked: "Was it hard getting back in shape after your pregnancy?" Sharing an adorable image of herself in a yellow bikini and hugging little Stormi, she said: "I snapped back pretty fast but it was never the same and still isn't! Once I accepted the change my confidence came back. It just takes time." 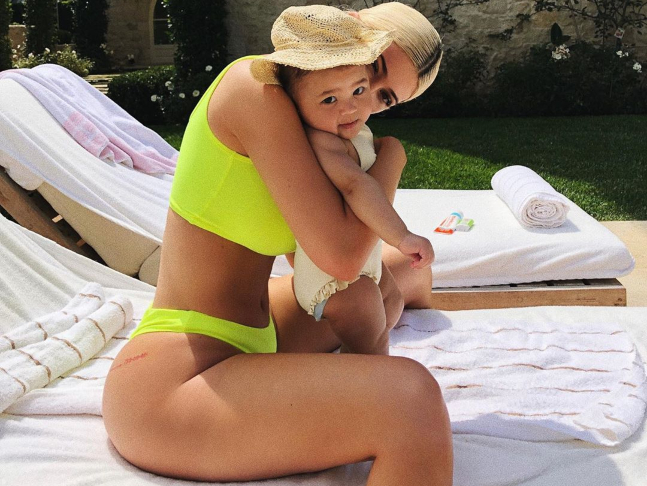 Another asked, "Did you have any stretch marks during your pregnancy? If so how did you get rid of them?". To which Kylie said, "On my breasts, butt, and thighs! I haven't gotten rid of them. Just accepted them as a little gift from Stormi lol." Another fan wanted to know what Kylie's favourite part of being pregnant was. The star responded, "Nothing more special than feeling your baby move and grow."

During the Q&A, Kylie also shared the surprisingly normal second name choice she had for Stormi and hinted she could still use it. She was asked: "What are other names you considered naming Stormi?" The personality answered: "Rose I still love that name..."

Kylie and Travis recently split, and have both spoken out to deny cheating on each other after rumours emerged.

Most of the negative comments were by women: Housewife-turned-Malayala

Zendaya put on wigs to motivate herself to workout; pretends to be different characters

Watch: Mum-to-be Anita Hassanandani radiates glow as she poses with ‘Bae and BaeBee’ in her latest maternity photoshoot