Veteran Bollywood choreographer Saroj Khan passed away in the wee hours of today morning due to cardiac arrest. She was 71-years-old and was admitted at Guru Nanak Hospital in Mumbai since June 17 after complaining of breathing issues. Touted as the ‘mother of dance’ in India, Saroj Khan is an inspiration not only through her exemplary work but also through her life.

Born on November 22, 1948, as Nirmala Nagpal to Kishanchand Sadhu Singh and Noni Singh, Saroj Khan started her Bollywood career as a child artist at the age of three with the film Nazarana as child Shyama and followed it up as a background dancer in the late 1950s. Reportedly, Saroj Khan was obsessed with dance. She used to dance with her shadow. Her mother thought that her daughter has become possessed took her to a doctor who said that she is blessed with a unique gift, and should be allowed to dance and express herself! 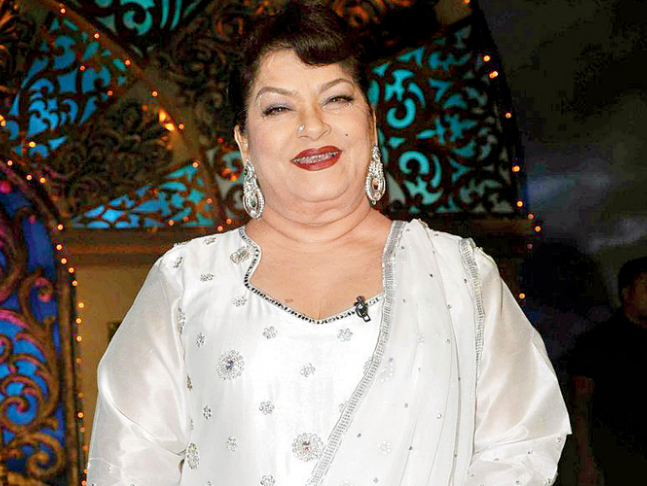 RECOMMENDED READ: Exclusive: ‘She used to dance with her soul; I was inspired by her fighting spirit and learned never to give up,’ says Sayantani Ghosh remembering life lessons by Saroj Khan

Saroj ji started her career as a child artiste in Bollywood and joined a dance troupe at the age of 10 when the roles dried up. She moved to choreography at the age of 13, when she became an assistant to well-known dance director B Sohanlal. She went on to marry her guru (Sohanlal) in 1962 when she was only 13 years old. Sohanalal was 41 then and already a married man with 4 children which she did not know at the time of marriage. At the young age of 14, Saroj had her first child with him- Hamid Khan (Raju Khan). In a throwback interview, Saroj had also revealed how she got married to Sohanlal. She had said, "I used to study in school those days, then one day my dance master Sohanlal tied a black thread around my neck and I got married.”

However, for Saroj, it was 1958 hit song Aiye Meherban from Madhubala and Ashok Kumar starrer Howrah Bridge where she came to notice as a background dancer. 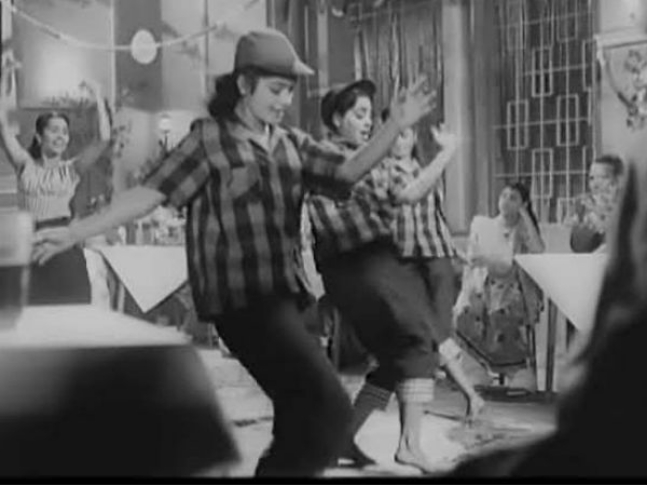 On the personal front, Saroj’s marriage was not a happy one and it hit rock bottom a few years later. Sohanlal and she separated but she continued to work with him as his assistant. They reunited once again when he suffered a heart attack and tried to rework on their relationship. They had another child, a daughter Hina Khan (Cuckoo). Saroj’s marriage with Sohanlal did not last long as he left and their kids and moved to Chennai. 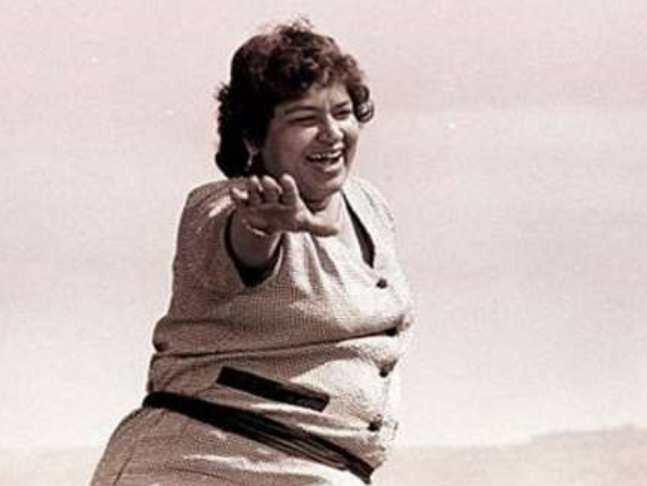 In 1975, Saroj married for the second time and tied the knot with businessman Sardar Roshan Khan. They had a daughter, Sukaina Khan who runs a dance institute in Dubai. Saroj later shifted to choreography, first as an assistant choreographer and later as an independent one with Geeta Mera Naam (1974). But she had to wait many years to receive acclaim which came with her work with Sridevi in Hawa Hawaai for Mr India (1987) and then there was no looking back. 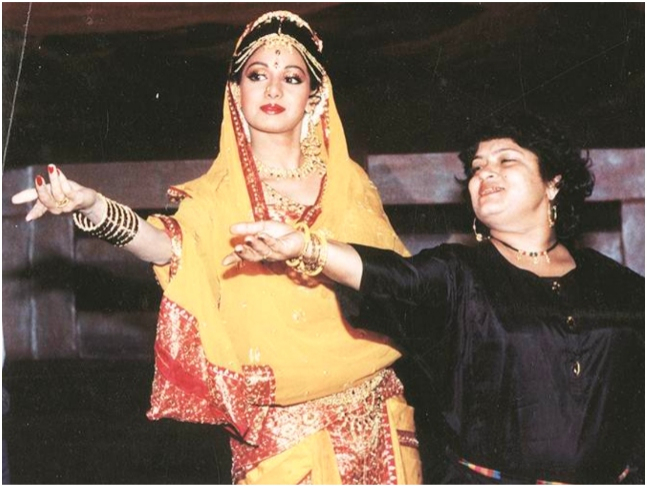 Fondly called ‘Master ji’, Saroj commanded a certain kind of respect that was kind of first for choreographers in Bollywood. She worked with many actresses especially Sridevi and Madhuri Dixit. She directed Sridevi in Mr. India, Chandni, Nagina and later with Madhuri in Ek Do Teen in Tezaab (1988), Tamma Tamma Loge in Thanedaar (1990) and Dhak Dhak Karne Laga in Beta (1992) and numerous others.

With the two best dancers dancing to her tunes, the rest was history. Saroj Khan was ruling the roost. Saroj ji was a recipient of not one but three National Award for Best Choreography. She won her first National Award for Dola Re Dola for Devdas in 2003, for Sringaram in 2006 and Jab We Met in 2008. She was also the first recipient of the Filmfare Best Choreography Award. Filmfare instituted this award after watching the excellent choreography and audience response to Saroj Khan’s song Ek Do Teen from Tezaab. Saroj Khan went on to have a hat-trick at the Filmfare awards winning consistently for 3 years from 1989 to 1991. She also holds the record for winning the most Filmfare Best Choreographer Awards, winning eight of them. 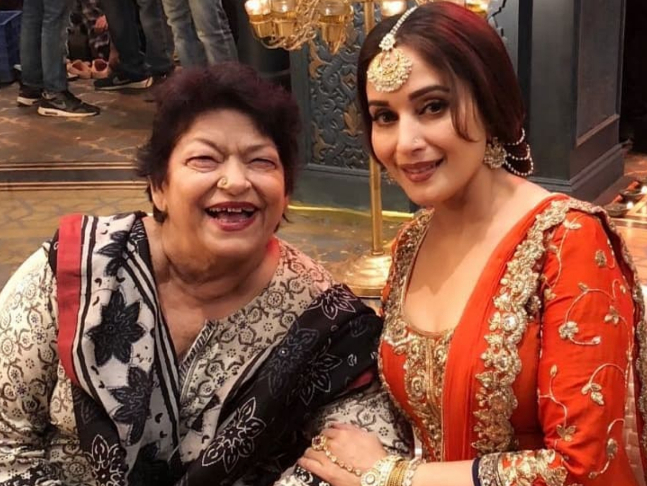 Saroj’s aura was not limited to the big screen only. She went on to judge various dance-based reality shows. Her Bollywood career had taken a setback in recent years but she came back with a bang by choreographing Tabaah Ho Gaye for Kalank in 2019. Apart from this, she was also an advisory member of Rishihood University in Haryana. Saroj was also honoured with American Choreography Award for her Outstanding Achievement in Lagaan: Once Upon a Time in India.

Saroj was not only an exemplary dancer-choreographer but was held in high esteem by all the celebrities. She was famous for giving Re 1 as 'shagun' to any actor whom she thought danced well. Interestingly, Amitabh Bachchan also became a recipient of that Re 1 coin and in his eulogy, for her, he mentioned the fact calling it an 'achievement'. 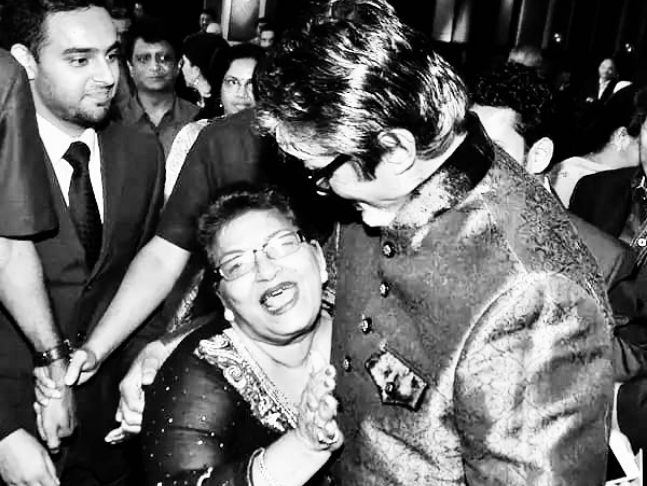 Saroj Khan contributed 46 years of her life in choreographing songs for Bollywood and had choreographed more than 2000  songs in over 200 films. Her death has left a huge void in the industry that no one would ever be able to fill.