Advertisement
HomeFASHIONFashion SpecialPeepingMoon Exclusive: I would have loved to work with late Sridevi; Gigi Hadid is my idol: Fashion designer Shehla Khan

Designer to the Bollywood brigade of Karisma Kapoor, Sonam Kapoor Ahuja, Tara Sutaria, Kiara Advani and latest to the bandwagon Alaya F, Shehla Khan is no new name to the fashion circuit. Known to put a glamourous spin on traditional couture, her collections are equal parts feminine and equal parts sexy. Thigh slit lehengas, corset blouses, and tulle dupattas along with sultry LBDs with a lacy train- she has time and again presented quintessential couture with a touch of modernity. 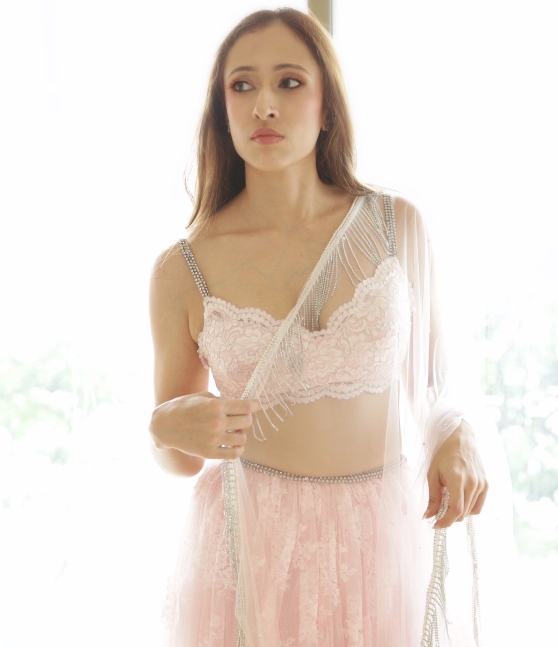 Recommended Read: Voluminous gowns to Victorian-inspired shirts and tonged mane, all the reasons to be obsessed with dukes and dames of Netflix’s 'Bridgerton'

You launched your latest collection ‘The Beautiful Fall’ amidst the pandemic? How was the entire experience shooting and launching a new collection amidst the COVID-19 pandemic?

In June, when we started working on it, we decided that life has to go on despite everything and this is what I do. When I was conceptualizing and designing this collection, I really thought that I have to give in my best to do my part and give people what I can to make them feel good about themselves. I tried putting together a collection that would inspire people in times like this where you don’t have to be dressed to the nines to feel good about yourself. Fashion and style can be easy and comfortable as well as chic and elaborate. While we were shooting, it was a bit combustive rather than scary as we had to deal with social distancing in the office and had clients come one at a time.

We were a crew of about 12-15 people at a studio and shooting quite a large number of looks. It was a bit scary in that sense, but we managed to pull it off quite safely and well. Everyone’s team was very particular about everything as far as hygiene and cleanliness go. We arranged sanitizers and shields for those who didn’t come equipped. In fact, at the end of the day, we felt like there was no pandemic. Being careful and cautious, we managed to pull off a very long shoot so that’s quite an achievement.

With people embracing the ‘new normal’ do you feel virtual shows are the way to go?

A mix of both. Digital is the way to go in general not only in times like these. There’s so much happening on social media all the time, people prefer to be present virtually as well as physically. But at the same time, I enjoy the old school fashion show. I would love to dress up and go to Paris Fashion Week. Given the time, it’s not an advisable thing but the way people are doing it abroad, maintaining the norms of social distancing and being cautious of everything including the models who were walking and had garments on. Many designers have done it in the recent season of Spring 2021. Jacquemus did his show in a field with a lot of social distancing, Fashion Week took place, Versace had their show and it was visible that the seating was arranged in such a way that all the precautions had been taken in terms of spacing out the seats, hygiene and even the models seemed like they weren’t crossing a certain distance between each other. Something that’s organized and carefully put together can also be done on the runway. Why should anyone want to compromise what they put out there? I do miss the old-school runway but at the same time, there are people who are doing it. If digital is the way we are going here that’s fine with me too. In a place like Mumbai or Delhi, it’s better to go digital because even if we maintain social distancing at the fashion show, it would be difficult to accommodate the number of people that we want to. So I think digitalization is definitely a good idea as of now.

How do you feel the pandemic of Coronavirus has changed things in the fashion industry? Do you feel these changes were long due?

The start of Coronavirus pushed us to come up with solutions that are environmentally friendly and economically effective with less wastage as possible. They were imminence to change in the fashion industry but what really pushed us to come out with that revolution was this pandemic which could be a good thing and a bad thing. The good thing that came out of it was that a lot of designers and brands decided to go season-less. As opposed to 8 seasons, we have 2-4 seasons in a year. As far as show and collections go, as opposed to having a collection of 40 pieces, it has no cut down to 20 pieces. It’s better for a customer as well as for us as suppliers because we were pulling out there 40 designs to give the consumer a variety to choose from. But, at the same time, it was not entirely beneficial for us as well as the customer. With the number of designers in India and internationally, each one of them coming up with a collection of 40-50 designers, it leaves the customer confused. Being more concise and having a crisper collection every lesser season and using more environmentally friendly methods to create collections, creating pieces that people can recycle is something that I personally and a lot of other designers have incorporated through this pandemic. And yes, these all changes were long due.

Do you think the global pandemic will change the look of fashion fests and red carpet events now?

It definitely had a huge effect on red carpet events in India and abroad. Maybe in India moreover, because our population is way more. At a time like this, just for the safety, benefit and welfare of everyone, it’s better to abstain from such events unless they are really necessary. An award function now can take place for the people who are actually getting the awards with proper precautions in place. They can dress up and go there and while it's put together in a very hygienic manner with precautions in place. There’s no need for an audience or any extra guests to be along over there. They can watch it from the comfort of their homes for their own safety and for the safety of the people who have to be there. What’s necessary really has to be done but in the most careful manner.

Which Bollywood and Hollywood celebrity would you like to dress up? I really enjoy dressing up everyone and take a lot of pleasure in making women and men look beautiful. Men, I haven’t had the opportunity to dress as much as women but I genuinely enjoy dressing up and putting things together. Every actress that I have dressed up, has been an absolute pleasure and I would like to dress them even more. I have not yet worked with Rekha and I would love to work with her in the future. I would have loved to work with Sridevi which I almost did and it didn’t work out materialise. 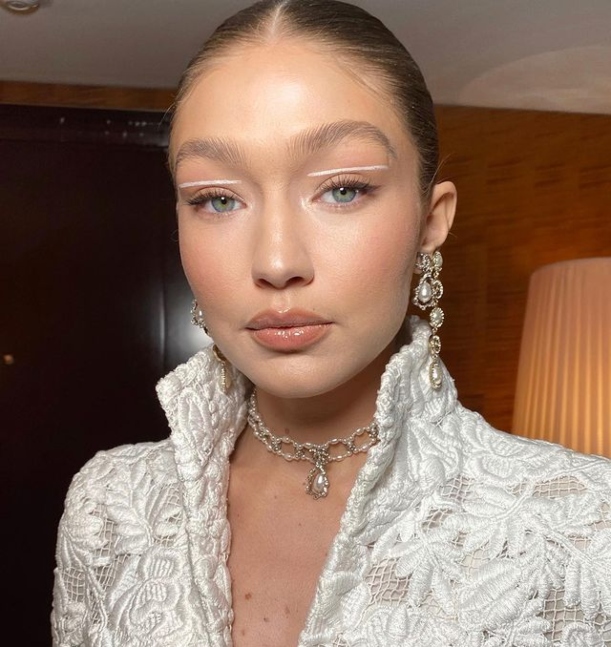 In Hollywood, I would love to dress Cate Blanchett, I am a big fan of the Kardashians, the Hadid sisters- Gigi Hadid, even though she is 10-12 years younger than me, she is like my idol. I think she is gorgeous. I would have loved to dress Lady Diana but sadly, it’s not possible.

Who has been your favorite muse so far? 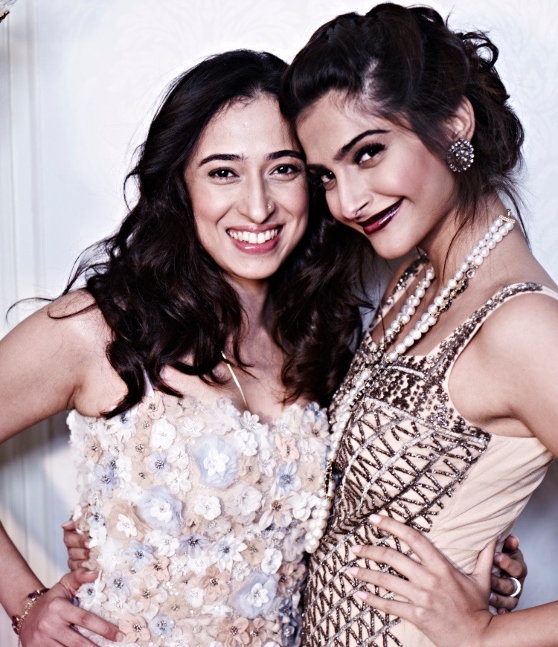 It’s really my passion to participate in making women or men look beautiful and well put together, it’s been really a privilege and an honour to dress up everyone that I have. Having said that I have a couple of friends in the industry and Sonam (Kapoor Ahuja) is one of them. She has been very supportive of my brand since the beginning. In fact, my first couple of campaigns were featuring her. She has been like a constant muse where I can always envision something on her for every collection of mine. At the same time, I have worked with almost every actress and it’s been an absolute honour and pleasure and I would like to continue doing it for as long as I can.

What do you prefer curating more- traditional, fusion, or western couture?

I don’t really believe in fusion but I enjoy doing both- Indian and western equally. If you have a look, each collection of mine has an element of western wear as well as Indian wear. But at the same time, I don’t necessarily stick to traditional Indian wear, I use a lot of western, old, vintage influence in my pieces as well. Though I do traditional upon customization.

Lastly, your views on Diet Sabya.

I think it’s great. I have always followed Diet Prada which is the brother/sister of Diet Sabya which was formed before it and is its international version. I think it’s very fair and good of them to point out things that are actually plagiarized. I very strongly believe in being original in whatever you do and it’s not fair for someone to copy and paste someone else’s work with their label on it. These people that are there to point it out are really important. But, sometimes it could be unintentional. If it’s the case of copy-paste then I am completely for it for being a pointer out, but a lot of facts also need to be attested before putting something out there as it can damage someone’s reputation when that really wasn’t the intention.

Eat right, work out: Mira Rajput Kapoor reveals how she shed her pregnancy weight in an AMA session