Advertisement
HomeBOLLYWOODENTERTAINMENT NEWS'The Kashmir Files is a good voice for Kashmiri Pandits, but ours is also an important film,' says Jhund producer, questions criteria of films getting tax-free

'The Kashmir Files is a good voice for Kashmiri Pandits, but ours is also an important film,' says Jhund producer, questions criteria of films getting tax-free

Now, as The Kashmir Files continues to rake in money and praise, Savita Raj Hiremath, the producer of Jhund is 'perplexed'. In a note on Facebook, Savita questioned why is The Kashmir Files tax-free and not Amitabh Bachchan-Nagraj Manjule's critically acclaimed film. "I recently watched Kashmir Files and as the story of Kashmiri Pandits exodus it's heartbreaking and is a story that needed to be told. It is a good voice for Kashmiri Pandits! But as the producer of JHUND I am perplexed. After all, Jhund is also an important film and has a story and a big message that has received tremendous acclaim and word of mouth from the audience," Savita wrote. 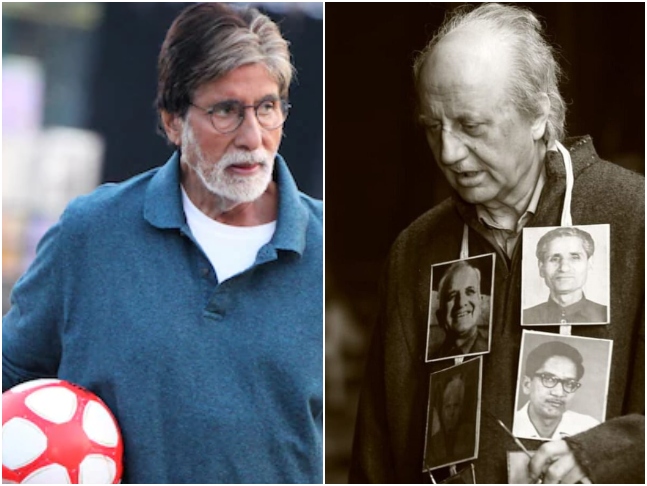 Recommended Read: The Kashmiri Pandit community who were subjected to exodus, genocide and forgotten for 32 years can start healing: Anupam Kher on the unprecedented success of The Kashmir Files

She further asked what's the criteria to declare a film tax-free. "So I want to find out what's the criterion on which the government selects a film to support it so strongly by making it tax-free, endorsing it through social media and asking Offices to showcase the film or give a half day holiday to its employees. After all Jhund also has a subject that is so crucial to our country's growth. Jhund is not just talking about the disparity between caste and economic disparity but also shows a way to make the lower strata of society find their success story," she shared. 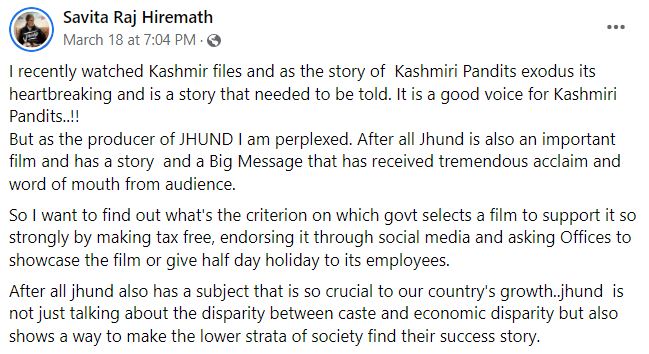 Jhund, directed by Nagraj Manjule, released on March 4. The film is about a retired college sports teacher who takes it upon himself to get a bunch of slum kids out of drugs and other crimes through the medium of football.

Apart from making it tax-free, several states even arranged free shows of The Kashmir Files. Half-day leaves for employees to watch the film were granted in some states. Amid threats, director Vivek got a Y-level security.