Kareena Kapoor Khan has always been a trendsetter to watch out for. Whatever she flaunts, becomes a wardrobe essential. And now, it seems like fashionistas and ‘Poo’ stans have another piece of clothing to obsess about!

Recently, Bebo teased the paparazzi by hiding her face behind a black hoodie when they tried to click pictures. Seated beside sister Karisma Kapoor and BFF Amrita Arora, Kareena buried her face in the black sweat tee and held it against the window of her car as they tried to take the snap of the beauty. Lolo pulled down the hoodie and Bebo burst out laughing.

Now, you may ask what’s so special about that. Well, the hoodie had the words ‘Gym Class Today’ written on them. Those who are a die-hard fan of Kabhi Khushi Kabhi Gham will instantly remember that line is from Bebo’s character ‘Poo’ from the film Kabhi Khushi Kabhie Gham (2001), which clocks 20 years of its release this month. Kareena was coming back from filmmaker Karan Johar’s K3G-themed party.

For the event, the actress stunned in an animal-print top teamed with a pair of black pants, chunky sneakers and a chic Chanel sling bag. She kept her glam understated with signature kohl-rimmed eyes and let her hair down. 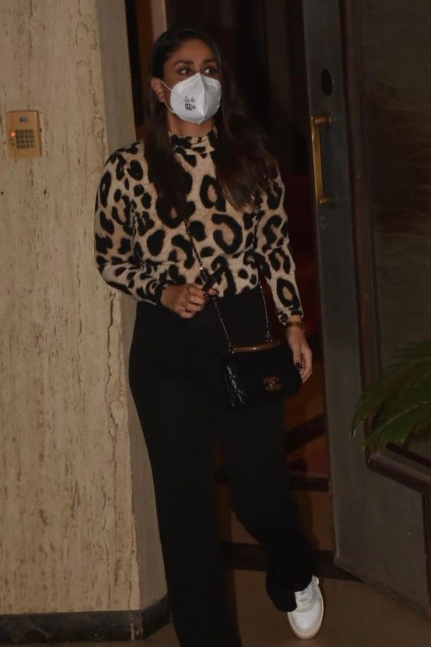 Umm…where can we sign up for K3G merch? Asking for a friend!