The makers of Ram Charan’s and Jr.NTR’s RRR,  Prabhas and Pooja Hegde’s Radhe Shyam and Kartik Aryan and Kriti Sanon’s Shehzada are ensuring to keep the audience invested with the films with new song teasers, new look and shooting schedule. Read on for more details:

The makers of Prabhas and Pooja Hegde's highly-anticipated film Radhe Shyam have released the teaser of their second Hindi song Soch Liya and we can definitely say this is the most romantic and soulful song of the year. The full song will release on 8th December. The song is sung by Arijit Singh, while the music is composed by Mithoon and the lyrics have been penned by Manoj Muntashir. The composer-singer duo has collaborated for several iconic hits, and they will be adding one more feather to their successful hat with Soch Liya. The teaser features the lead pair Prabhas and Pooja and visually the song will resonate with everyone as it is about the emotional journey the actors are going through.

Radhe Shyam will hit the screens on January 14, 2022. It’s a multi-lingual film, helmed by Radha Krishna Kumar, presented by Gulshan Kumar, and T-Series. It is produced by UV Creations. The film is produced by Bhushan Kumar, Vamsi and Pramod. 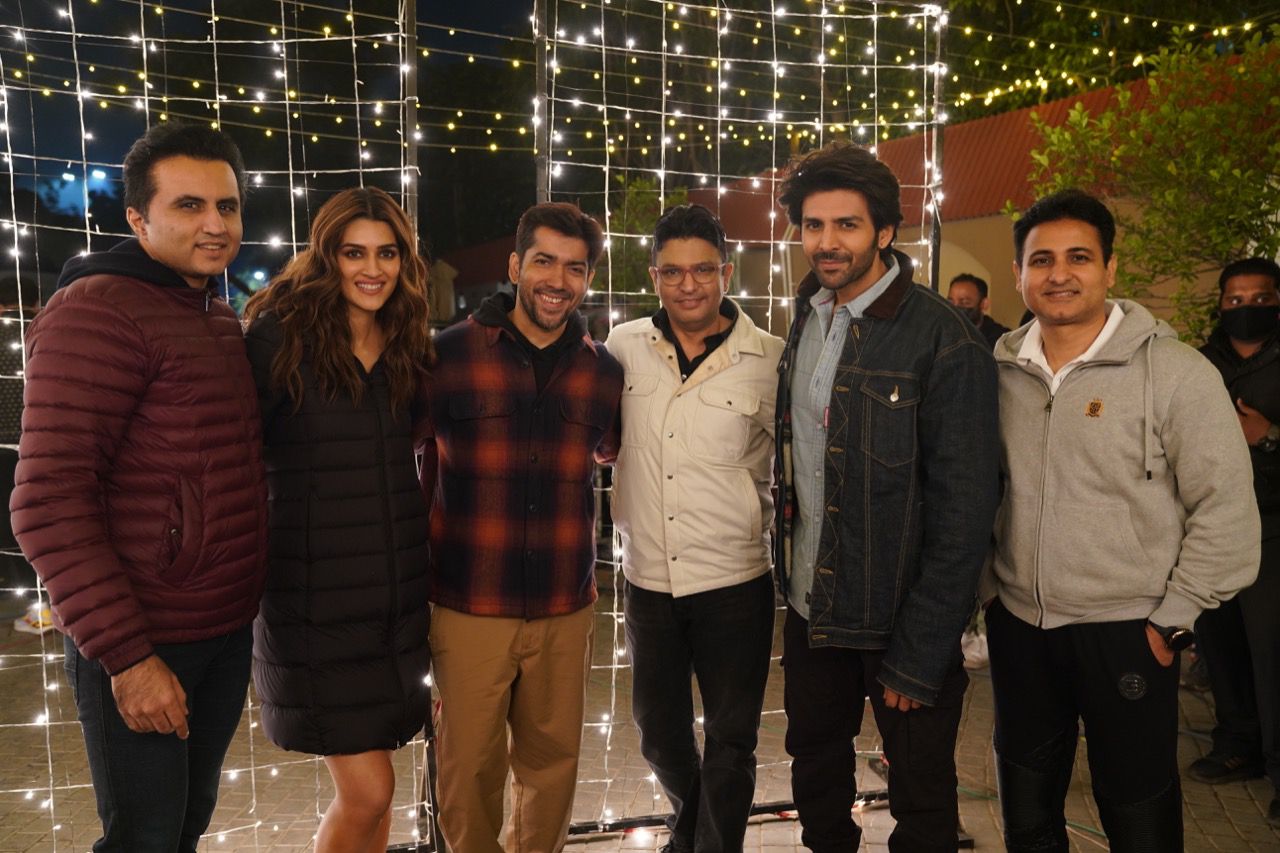 The making of the much-anticipated film Shehzada is in full gear. While the last update had that the team is in Delhi shooting major sequences in the city where the film is set, now we have learnt that they have commenced the night schedule of the film. For the first time, the entire Shehzada team has been spotted together in Delhi for their night schedule. An exclusive picture from the sets features producers Bhushan Kumar and Aman Gill, filmmaker Rohit Dhawan, and star cast Kartik Aaryan and Kriti Sanon.

While speaking on the same, Bhushan Kumar said, "We have finally kickstarted the night schedule of Shehzada. We will be shooting for a song sequence that plays a pivotal role in the narrative. The entire team is really excited about the same." In a similar vein, Aman Gill said, "We are excited to start shooting the first song of the film in Delhi  after extensively shooting the talkie portions here. Our director Rohit Dhawan has planned to showcase the grandeur and character of the city in many visuals being picturedized on the foot tapping song composed by Pritam.”

Jr. NTR's look as Bheem from RRR is fearless and ferocious 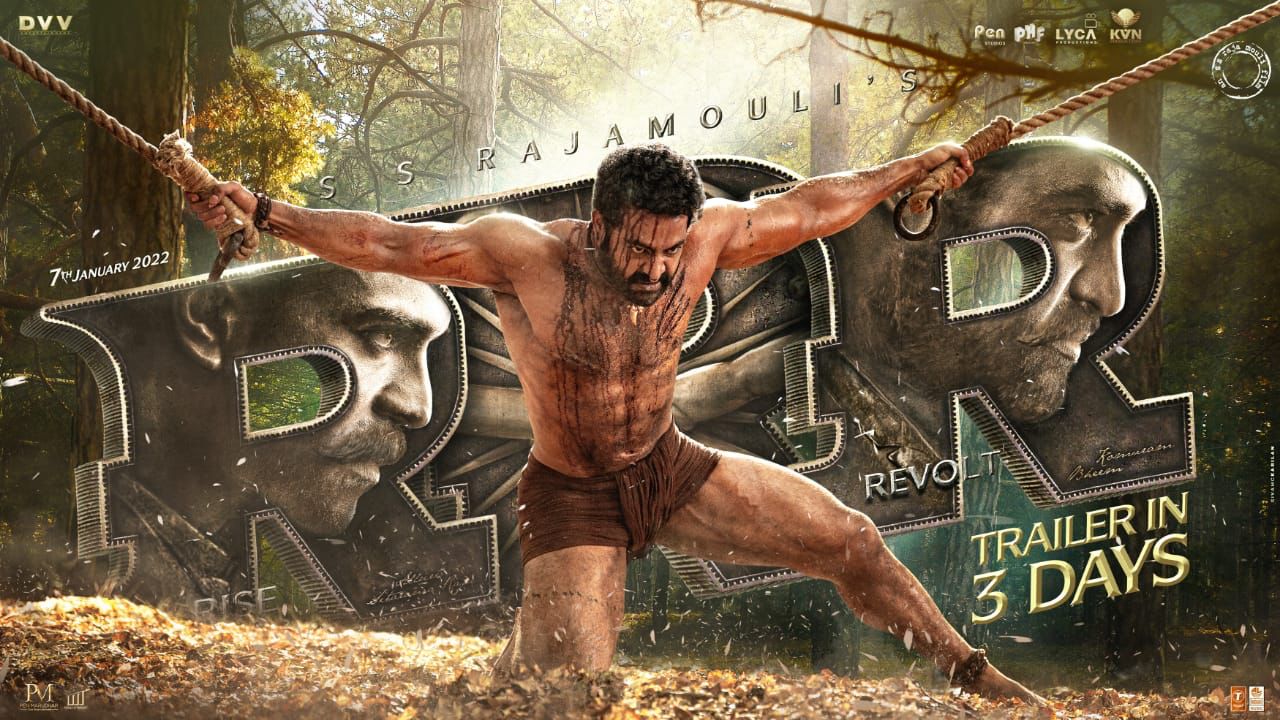 Ever since S.S Rajamouli has announced his next pan-Indian movie RRR, there has been huge anticipation and excitement around its release. It is one of the most awaited films nationally. After announcing the release date, the makers have released a new poster of the film featuring Jr NTR as Komaram Bheem, giving us a small glimpse of what can be expected from the actor in the film.

The new RRR poster sees fierce, bloody Bheem tied with ropes flaunting his six pack abs, while the RRR movie symbol at the backdrop features Ramcharan's face imprinted on it. The makers have started the countdown of the trailer with an impressive poster release. Earlier, the makers have released two songs from the film. Janani a soulful song which will awaken the patriot in you, and other was a small glimpse of the bond that revolutionaries, Alluri Sitarama Raju and Komaram Nozam of Hyderabad respectively share with each other, in a song tittle Nacho Nacho.

RRR is a fictional story about two Indian revolutionaries, Alluri Sitarama Raju and Komaram Bheem, who fought against the British Raj and Nizam of Hyderabad respectively. Apart from this, there are many details that are not revealed, like Ajay and Alia's character for starters, even the song Janani doesn't give out a clear picture about the film or their characters. As the story is going to be emotional yet filled with a lot of action and drama and plus the scale it has been made is so huge that the makers want the audiences to enjoy the visuals in the theater. RRR includes a star-studded lineup besides lead actors Ram Charan and Jr. NTR. Ajay Devgn, Alia Bhatt, Olivia Morris will be seen in pivotal roles while Samuthirakani, Ray Stevenson, and Alison Doody join in as supporting roles.

Jayantilal Gada (PEN) has bagged the theatrical distribution rights across North India and has also bought worldwide electronic rights for all languages. Pen Marudhar will be distributing the film in the North Territory. The Telugu-language period action drama film is produced by D. V. V. Danayya of DVV Entertainments. RRR is releasing on 7th January, 2022.