News of Bollywood superstar Akshay Kumar doing a film with debutant Ahan Shetty for Sajid Nadiadwala’s banner Nadiadwala Grandson Entertainment went viral today after an entertainment website reported it “exclusively”. However, PeepingMoon learned that this was not true from the production house. Our subsequent story was aggressively challenged by the reporter and rude, unprofessional things were said about us by him on social media. But we didn’t respond. Not against him, nor the website.

Now, Akshay has refuted the report and called out the ‘fake’ news. Reacting sharply to the fake news report of his collaboration with Ahan and Sajid, Akshay wrote, “10/10 on FAKE news scale! How about I start my own fake news busting business?”  Time to eat crow.

10/10 on FAKE news scale! How about I start my own fake news busting business ? https://t.co/oiXSBr4nD9

PeepingMoon had revealed this morning that the news was not true – Sajid was not making any such film or even thinking on those lines. The production house debunked the story that said the Akshay-Ahan film was in the planning stage and that Sajid had a script that demanded an unique star cast. Now, with Akshay's angry clarification, it has been confirmed that no such film was ever in the works. 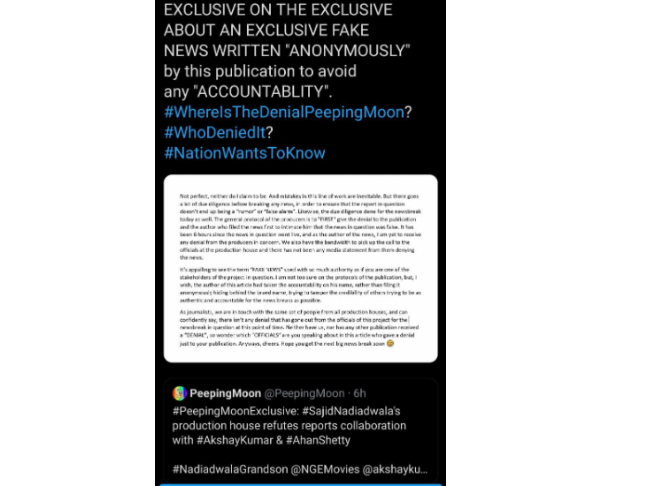