Advertisement
HomeBOLLYWOODENTERTAINMENT NEWSVarun Dhawan does ‘naamkaran’ of his pup, shares adorable photos with wife Natasha Dalal and his furry baby

Varun Dhawan embraced ‘fatherhood’ a few days ago by adopting an adorable puppy with wife Natasha Dalal. Now, after the actor asked for name suggestions for the pup from his fans, he has revealed the name of his ‘son’ on social media.

Taking to Instagram, Varun shared a picture of the pup with Natasha and captioned it, “JOEY Puppy power.” He later deleted the post but the pictures can be seen on his Instagram stories. 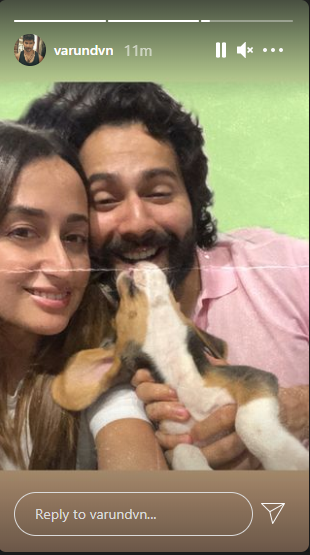 RECOMMENDED READ: Watch: Varun Dhawan embraces 'fatherhood' as he welcomes an adorable beagle puppy into his family, asks fans to help him name his fur baby The actor has finally done the ‘naamkaran’ ceremony of the puppy and named him Joey. Looks like the couple are happy to take their family forward with new additions.

On the work front, Varun has Amar Kaushik's Bhediya and Raj Mehta's Jug Jug Jeeyo in his lineup.