Well known Punjabi singer Juggy D has reportedly been arrested in London for domestic violence. The arrest happened on Tuesday. As per media reports, Juggy D had reportedly partied in The Claridges Hotel in New Delhi and had flown to London to surprise his wife Kiran Sandhi on their 11th wedding anniversary. However, things went out of hand when Kiran got hold of his phone and read some of his messages. This apparently upset and angered Juggy and it led to a heated altercation between them; Kiran then called the London Police seeking help.

A source told an online portal that Kiran was going through a bad phase for a while and it is shocking that after 11 years of marriage and three children, she decided to separate. The source said that Kiran got Juggy arrested on the charge of domestic violence. 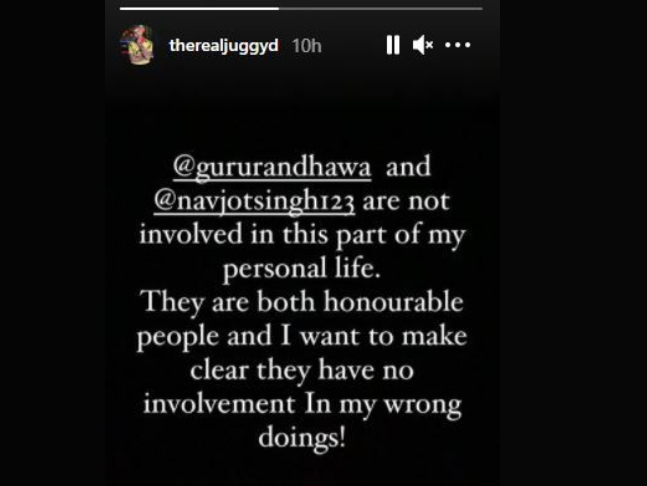 In addition to this, the report in the portal further claims that Kiran also found out via chats that Juggy was apparently cheating on her. Reportedly, she took over Juggy’s Instagram account and posted two videos and a screenshot of a chat with someone whose name was saved as ‘Guru India’ in the singer’s phone. The chat spoke about taking drugs and hiring escorts in Delhi and Mumbai.

Although the posts are no longer up on Juggy’s Instagram feed, the singer issued a clarification that the post did not attribute to Guru Randhawa or Navjot Singh and they have ‘no involvement in my wrongdoings’.

A couple of days ago, Juggy had posted a heartfelt video thanking his wife and expressing his love for her on their 11th wedding anniversary.