Neetu Kapoor, who will be seen as a special guest in the upcoming episode of Indian Idol 12 that pays a tribute to her and her husband Rishi Kapoor, shared some stunning new photos of her look in the show on social media. He photo shoot elicited some thrilling comments from celebs, fans and family. However, Alia Bhatt’s comment on Neetu’s post took the cake.

Neetu captioned the images, “Stress less and enjoy the best Had lots of fun at the sets of Indian Idol!! @sonytvofficial Thanks for making me look fab! Outfit @abujanisandeepkhosla Jewellery @kunaljdedhia @stylebyami @mehakoberoi @sheetal_f_khan.”

Alia, who is dating Neetu’s son and actor Ranbir Kapoor showered love on the pictures and wrote, “So prettyyyyyy,” along with heart emojis. “How gorgeous you are,” Neelam Kothari Soni wrote. Riddhima Kapoor Sahni and Karisma Kapoor dropped heart emojis on the post. 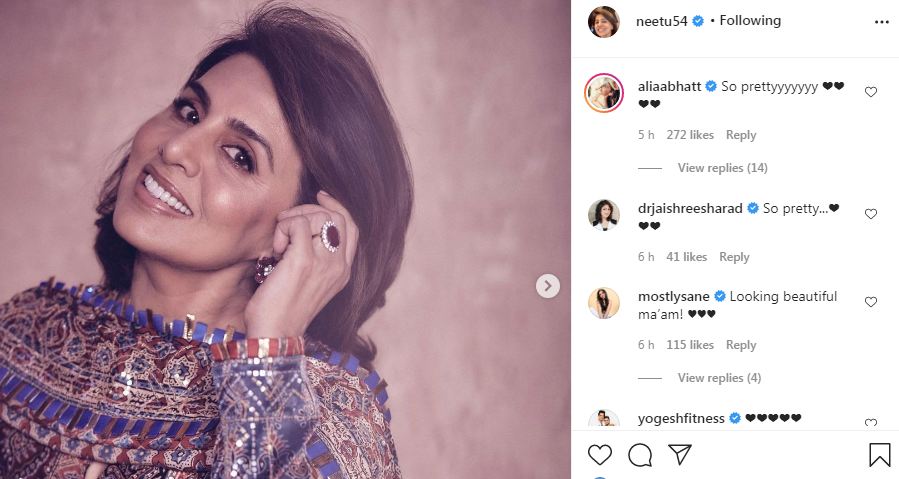 The episode of Indian Idol 12 will feature special messages for Neetu from her two children, Ranbir and Riddhima. “Maa, aap humare family ki iron lady ho (you are the iron lady of our family). I love you, we love you, everyone loves you. You are our timeless Indian Idol,” Riddhima said in a video, while Ranbir recalled a childhood anecdote about his having no skill in singing and learning classical music.