Advertisement
HomeBOLLYWOODENTERTAINMENT NEWSSuniel Shetty lodges police complaint against film producers for circulating his fake posters, says 'I don’t know whose film it is'

Bollywood actor Suniel Shetty has filed a police complaint against a production company for circulating a fake poster of a film featuring him. The actor said that his picture was used without his permission in the poster. He filed the complaint at Versova Police Station, Mumbai.

Suniel said that the producers used his pictures without his permission. His complaint, registered at the Versova Police Station, called it an act of 'complete fraud'. Speaking to leading daily, Suniel said, "I don’t know whose film it is and who they are, nor did I sign this film. They are openly exploiting an artiste. They are trying to get the film financed using my name. This is ruining my reputation and as such, I decided to file a complaint.” 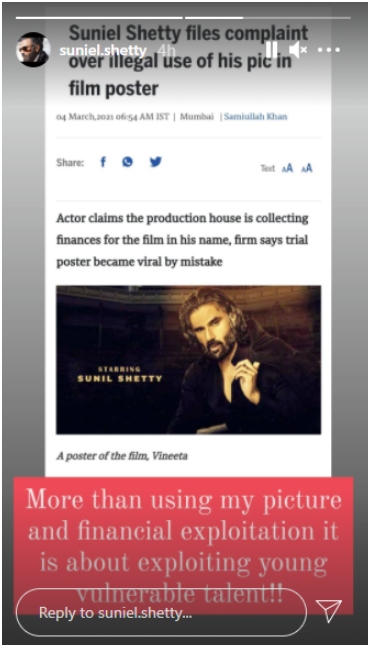 The production house has called it a mistake, adding that they were not seeking money from anyone with help from the posters. "We made a mistake. We were preparing for the casting of our two films keeping two to three actors, including Shetty and Bobby Deol, in mind. We made a poster using their photos just to check how they look. But someone made the posters go viral on social media. The posters were later deleted,” said Ranveer Singh, the manager of the production house.

In a tweet shared by Suniel on Thursday, he said that he was more concerned about how young persons would have been duped by the posters. "Thank you for putting it out there Sami ... more than using my picture and financial exploitation it is about exploiting young vulnerable talent," he wrote.

Thank you for putting it out there Sami ... more than using my picture and financial exploitation it is about exploiting young vulnerable talent!! https://t.co/kc168FDjKE