Actress Shraddha Kapoor, who is quite active on social media, is currently having a gala time in the Maldives with her family. She jetted off to attend her cousin Priyaank Sharma’s wedding with Shaza Morani.

A lot of videos and pictures from the wedding are doing the rounds on the internet. Recently, actress Tejaswini Kolhapure shared a family picture on her Instagram story which also featured Shraddha’s rumoured boyfriend Rohan Shrestha. Along with the picture, she wrote, “family”. Shraddha’s fans could not keep calm after seeing the photo. A fan soon asked the couple to marry each other 'ASAP'. 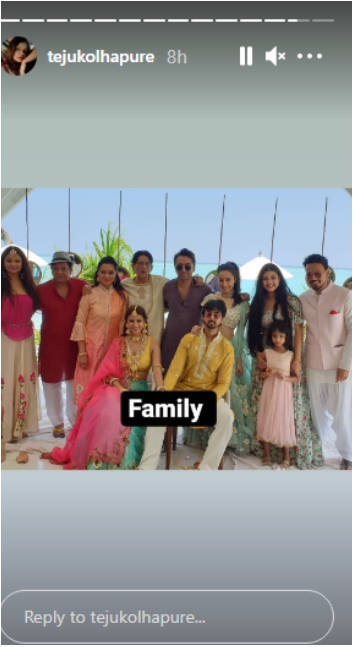 On Monday, Shraddha shared video of herself on Instagram and showed the outfit she wore for the haldi ceremony. She wore a baby blue lehenga and twirled on the white sand beach with the sea behind her.

Priyaank and Shaza had a court wedding in early February and later threw a party for their friends and family. It seems like a grander wedding function is being organised in Maldives for the couple now.