Kareena shares ‘a-maize-ing’ pic of cousins Taimur and Inaaya; Shanaya lights up internet with her belly dancing in Suhana's skirt; inside Angad’s b'day celebrations with Neha-Mehr

Our Bollywood celebs’ social media game is always on point. They always manage to steal the spotlight with their photos, videos and sometimes with witty captions too. Kareena Kapoor Khan, Neha Dhupia and Sanjay Kapoor’s and Maheep Kapoor’s daughter Shanaya Kapoor lit up the internet with their social media posts. Shanaya’s post had a BFF Suhana Khan connect as well.

Kareena Kapoor shares cute pics of cousins Taimur and Inaaya, with ‘the boys’ at the back

Kareena and Saif recently hosted his younger sister Soha Ali Khan along with her husband Kunal Kemmu and daughter Inaaya Naumi Kemmu at their new house. Kareena shared an extremely cute picture of her son Taimur with Inaaya today on Instagram. She captioned it, “Aren't they just a-maize-ing? #TimAndInni PS: Well, the boys in the back aren't too bad either.” In the picture, Taimur and Inaaya look as if they have just come from the pool and are gorging on some maize while Kunal and Saif are deep in conversation behind them.

Shanaya Kapoor lights up internet with her belly dance moves, thanks BFF Suhana Khan for lending her the skirt

Shanaya set Instagram on fire with her new belly dancing moves. For her latest video, she ‘tried something different’ and proved that her dancing skills are top-notch. The ‘different’ that Shanaya meant in her caption is that the choreography is a mix of belly dance and contemporary with some dramatic camera work. She also thanked her best friend Shah Rukh Khan’s daughter Suhana Khan for ‘letting her steal her skirt’. She captioned the video, “tried something different with @sanjanamuthreja (ps: thanks for letting me steal ur skirt @suhanakhan2).”

Neha Dhupia shared an adorable birthday wish for husband Angad Bedi on his 38th birthday. The picture shows them chilling on a beach suggesting that the couple has taken a break to ring in his special day. However, it is their daughter Mehr who has got their fans going crazy. Neha shared several pictures of the birthday celebration with Mehr and Angad around midnight on her Instagram stories. In one such picture, Mehr can be seen sitting in a crochet costume by the beach with balloons in her hands. She captioned it, "Lots to celebrate but firstly my daddy's birthday." 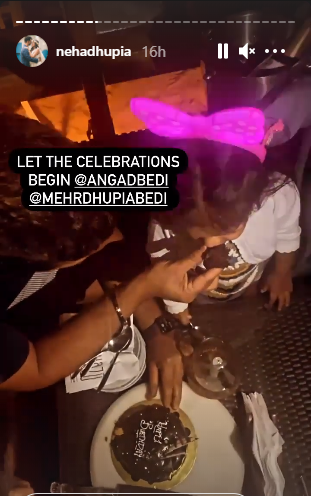 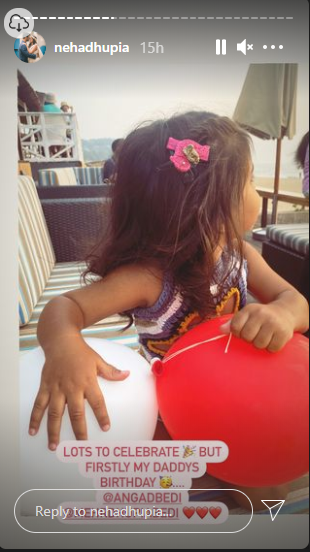 Sharing a picture and a boomerang video on Instagram, Neha wrote, "Officially renaming today as #AngadBedi day .... #happybirthday my love." The post shows Angad in a shirtless avatar and Neha in a white maxi dress with the beach in the background.