The year 2020 is coming to an end and it is time to look back at what happened in these 12 months. While the pandemic kept people at home, social media became everyone's go-to-partner for the latest updates and entertainment. Similarly, Twitter played a key role in providing every bit of information to all seated at home. Recently, the micro-blogging site released its list of the 'most tweeted about' films of 2020.

Sushant Singh Rajput's final film Dil Bechara became the 'Most Tweeted About' film. The Mukesh Chhabra directorial debut saw Sanjana Sanghi in the lead with Sushant. Fans of SSR poured their heart out on the film and paid tribute to the actor on the micro-blogging site. Dil Bechara released on July 24, 2020. 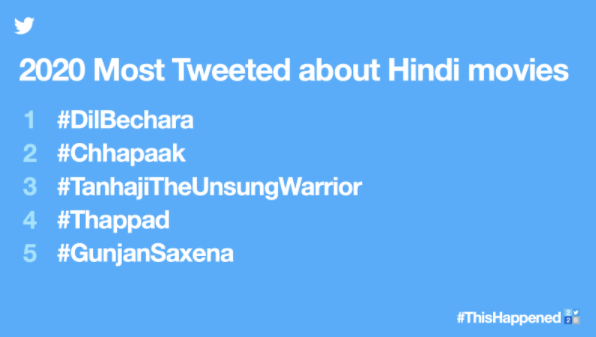 Ajay Devgn's Tanhaji: The Unsung Warrior brought a brave Maratha soldier's epic tale to celluloid. In the Ajay vs Saif Ali Khan film directed by Om Raut, the audience got to experience spectacular visuals, action stunts and great performances by the lead cast. The film clashed with Deepika's Chhapaak on January 10, 2020.

Janhvi Kapoor's Gunjan Saxena: The Kargil Girl was one of the most perfect films of the year and there ain't a doubt. The actress's second Bollywood film released on Netflix due to the COVID-19 pandemic. Starring Janhvi as IAF pilot Gunjan Saxena who serves the country in the Kargil war, the Sharan Sharma directorial earned appreciation from the audience on Twitter.