Advertisement
HomeBOLLYWOODENTERTAINMENT NEWSWould have loved for the look to come out the way it was intended: Abhishek Bachchan on his leaked photos from 'Bob Biswas' sets

Ever since the film Bob Biswas has been announced, the anticipation has surely shot up high. A spin-off of the popular antagonist from Sujoy Ghosh's Kahaani starring Vidya Balan, the project will see Abhishek Bachchan slipping into the titular role which was formerly played by the renowned Bengali actor Saswata Chatterjee. Recently, Abhishek's photos from the Bob Biswas set had gone viral. The actor, who is currently shooting in Kolkata, had transformed into a next-door-man, Bob Biswas. He was spotted in Kolkata earlier, shooting for the upcoming film with co-star Chitrangada Singh, who was also seen in a saree in one of the leaked photos. Abhishek looked much different from his usual stylish self.

Now, talking about the look getting leaked, Junior Bachchan said, "The media knew we were shooting in Kolkata. So, the photographers showed up at the venue [and clicked the pictures]. I would have loved for the look to come out the way Diya [Annapurna Ghosh, director] intended — during our marketing campaign." Howeber, he added that he is humbled by the praise coming his way. "The [netizens'] reaction was an endorsement that we are doing something right. I believe that if you look the character, half your job is done. In Kahaani, Bob Biswas [portrayed by Saswata Chatterjee] is portly, so I had to pile on the kilos. Maintaining the frame during the lockdown was difficult." 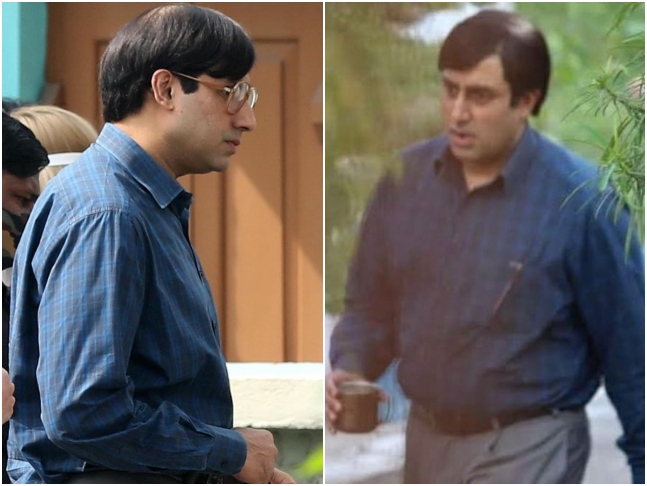 Recommended Read: Khub Bhalo! Abhishek Bachchan looks unrecognizable on the sets of 'Bob Biswas' as he resumes shooting in Kolkata

The crime thriller, also featuring Chitrangda Singh, was one of the many projects affected due to the lockdown. AB agreed that slipping into the character after a long break was initially difficult. "When you are shooting a film, there's a creative momentum that builds up. So, getting back in the groove can be challenging. But, after the first day, it didn't feel that we had a nine-month break."

Bob Biswas will be produced by Shah Rukh Khan, Gauri Khan, Sujoy Ghosh and Gaurav Verma, the film is a Bound Script production presented by Red Chillies Entertainment. It was slated to release this year itself but was postponed due to the COVID-19 pandemic. Bob Biswas marks Diya's directorial debut.