Advertisement
HomeBOLLYWOODENTERTAINMENT NEWS‘That's the only thing I'm looking for,’ says Kapil Dev hoping to see his unbeaten knock of 175 at Tunbridge Wells making it to Ranveer Singh’s ‘83

‘That's the only thing I'm looking for,’ says Kapil Dev hoping to see his unbeaten knock of 175 at Tunbridge Wells making it to Ranveer Singh’s ‘83

Former India cricket captain Kapil Dev appeared on Neha Dhupia’s No Filter Neha Season 5 and spoke a number of things related to cricket, his upcoming biopic ’83 and his iconic Tunbridge Wells innings. Kapil’s mammoth unbeaten knock of 175 runs against Zimbabwe in the 1983 World Cup had resuscitated India from a precarious 17 for five that was threatening to dash the country’s hope in the championship.

During the podcast, Kapil recalled his innings and hoped that it makes it to the film ’83 that is awaiting release. ’83 has been directed by Kabir Khan and Ranveer Singh essays the role of Kapil in the film while Deepika Padukone plays his wife Romi Dev. Talking about the innings, Kapil said, “That's the only thing I'm looking for. Because, I think, lot of stories comes out when you are in an act of that. You don't know what's happening and how they've come out with the movie or that episode of Zimbabwe inning, I don't know. But, that's what I want to see. Other things, we have seen on television so we know pretty well what's happening.” 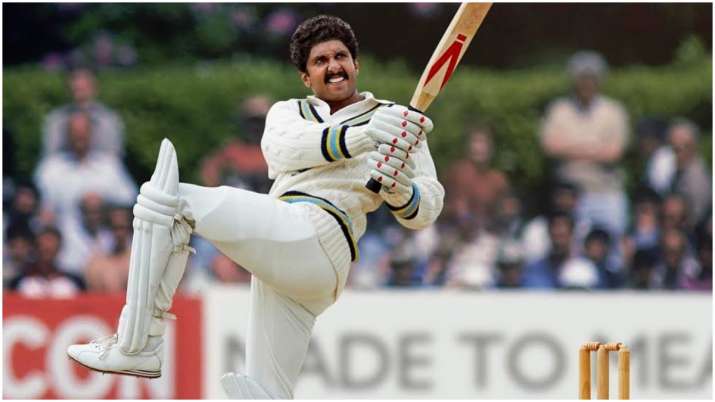 Ranveer Singh as Kapil Dev in a new still from '83

He also shared his experience of hitting 175 runs at the iconic ground and said, “It was a blank. Absolute blank. Because, when you are in an act, you don't think too much. And, when that thing happens, then you can say. Middle of the action if I say Sholay, Amitabh Bachchan and Dharamji don't know kya ho raha hai, woh toh baad mein pata chalta hai ki picture bann gayi hai aur bahut acha hua hai. Uss time jab aap kaam kar rahe hote hai uss time aap ko nahi pata hota hai. You are just playing and not thinking too much. And 99% you don't think too much. Because agar aapka mind hi chala gaya hai ki log kya sochenge toh aap khak kheloge. Kya kheloge (You don’t think too much while playing, your entire concentration is on the game. When Amitabh Bachchan and Dharmendra were working on Sholay they hardly knew that the film is going to be so good. If your mind wanders and you start thinking what will people say then you won’t be able to play).”

’83 will soon release in theatres once things go back to normal. It recounts India’s first World Cup win of 1983 in which Kapil captained the side and brought the trophy home for the first time.