Priyanka Chopra Jonas on Thursday reminisced about her grey role in the thriller Aitraaz, which was released 16 years ago on this day. Aitraaz, co-starring Akshay Kumar and Kareena Kapoor Khan, was one of the Diwali releases of 2004. The film was inspired by the 1994 Hollywood hit, Disclosure, starring Michael Douglas and Demi Moore. Playing the negative role Moore essayed in the original, Priyanka had won accolades for her performance as Sonia Roy.

She shared a clip from the film on Instagram Stories, and wrote: "2004, One year into being an actor, I played Sonia Roy in the Abbas-Mastan thriller Aitraaz. It was by far the boldest part I had taken on..."Wicked, predatory, complicated and self-serving for the most part, but also surprisingly vulnerable and emotional. Playing Sonia taught me to play characters with conviction not judgement. #16yearsofAitraaz #20in2020." 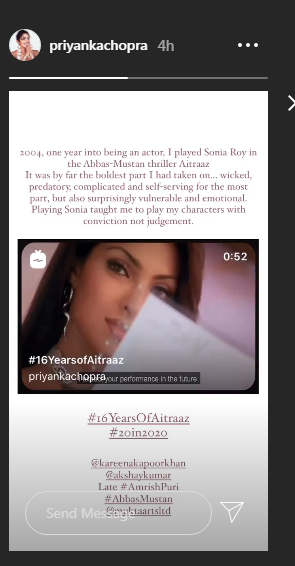 RECOMMENDED READ: ‘Each piece slightly reflects the stages in my journey,’ says Priyanka Chopra Jonas in a video ahead of the release of her memoir ‘Unfinished’

Currently living in the US with husband, singer Nick Jonas, she is all set to make her digital debut with The White Tiger co-starring Aadarsh Gourav and Rajkummar Rao.