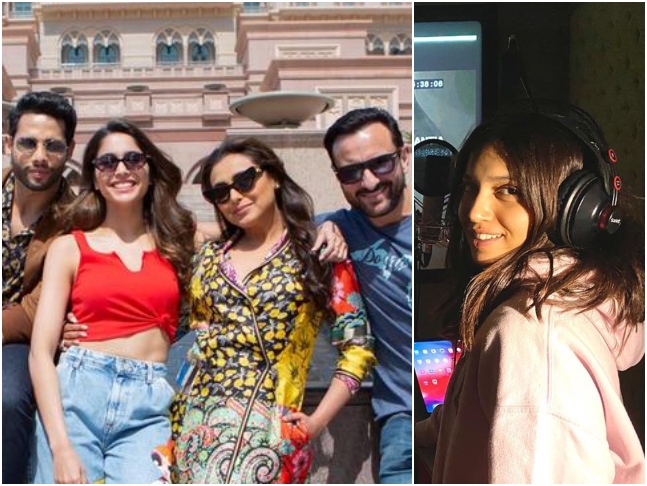 After the lockdown was relaxed in June, Bollywood geared up to wrap up work that came to a halt due to the Coronavirus pandemic. Now, a few months later, as some filmmakers are yet to take their films on floor, the team of Bunty Aur Babli 2 finished dubbing for the light-hearted entertainer. The film stars Siddhant Chaturvedi, Rani Mukerji, Sharvari and Saif Ali Khan in the lead roles. Directed by Varun V. Sharma, Bunty Aur Babli 2 is a sequel to Abhishek Bachchan's and Rani's 2005 hit film of the same name.

Talking to a media agency, director Varun told, "All actors have wrapped up dubbing for the film. 'Bunty Aur Babli 2' is a hilarious big-screen entertainer and we can't wait to show our film to the audience." It seems Siddhant completed dubbing for his portions as the actor is in Goa for the shoot of Shakun Batra's next co-starring Deepika Padukone, Ananya Panday and Dhairya Karwa. Saif is also out of Mumbai. He is at his Pataudi Palace with wife Kareena Kapoor Khan and son Taimur Ali Khan.

Wrapped up #BuntyAurBabli2 with one last song Grateful that the entire team made sure all safety measures were thoroughly implemented  #SaifAliKhan #RaniMukerji @sharvari @varun.v.sharma @buntyaurbabli2 @yrf

Bhumi Pednekar, who is leading the upcoming film Durgavati, completed dubbing for the horror-thriller. Directed by G. Ashok, the film is the official remake of Anushka Shetty's 2018 Telugu film, Bhaagamathie. "Dub Completed!
My life is now more like Rasode Main Kaun Tha? Actually Darwaze ke peeche kaun tha ?  Bye Durgavati, see you the other side," Bhumi wrote while sharing a picture from the recording studio. Durgavati will release on Amazon Prime Video on December 11, 2020.