PeepingMoon.com was the first to inform its readers about Deepika Padukone, Siddhant Chaturvedi and Ananya Panday being roped in for Shakun Batra's upcoming directorial. Karan Johar, who will be producing the modern day relationship tale, too confirmed the news in a statement. Shakun, who has previously worked on Ek Main Aur Ekk Tu and Kapoor & Sons as a director, will also bankroll the film with Karan's production house - Dharma Productions. Ever since the announcement of the film was out, fans could not contain their excitement.

However, the shoot of the film got delayed due to the COVID-19 pandemic. Earlier slated to be shot in Sri Lanka, the film is not being made in Goa. Recently, the team had jetted off to Goa for the shoot. Now, to increase the excitement of fans, Deepika shared a boomerang on Instagram from her set and captioned it as, "3 days to go". 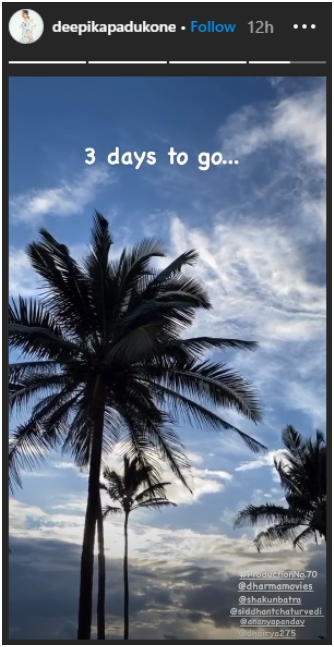 Recommended Read: Deepika Padukone adds a pop of neon as she heads to Goa for Shakun Batra's film with co-star Siddhant Chaturvedi

It is not yet confirmed what it is about but going by the tags with the picture, it appears to be something related to her film with director Shakun. Deepika tagged Dharma Productions, Shakun, co-stars Siddhant Chaturvedi, Ananya Panday and Uri actor Dhairya Karwa. Ananya and Siddhant even reposted the story. The yet to be titled film is said to release on Valentine's Day in 2021.