Advertisement
HomeBOLLYWOODENTERTAINMENT NEWSAyushmann Khurrana starts physical prep to play a cross-functional athlete in his next film, refrains from revealing look on social media!

Ayushmann Khurrana starts physical prep to play a cross-functional athlete in his next film, refrains from revealing look on social media!

Ayushmann Khurrana is undergoing a massive physical transformation for his next, a progressive love story that is being directed by Abhishek Kapoor (Kai Po Che!, Rock On!! and Kedarnath). It has come to light that the star is being severely elusive on his social media and hasn’t been posting new images of himself. All that people are getting to see are his endorsement shoots that Ayushmann has wrapped some time back.

Ayushmann fueled this theory further through his new social media update. The versatile actor, who is a thought-leader due to the positive social messages he propagates through his movies, told his fans that he has indeed started his training to achieve the desired physique. He captioned this screenshot ‘Here we go!’, added a powerlifting emoji and also tagged his director Abhishek. This practically confirms that Ayushmann has begun his transformation journey!

Ayushmann plays a cross functional athlete in the film and he put up a screen-shot of him discussing his training schedule with his trainer Rakesh Udiyar. However, he again refrained from coming online and showing himself which means there could be visible changes due to his transformation. 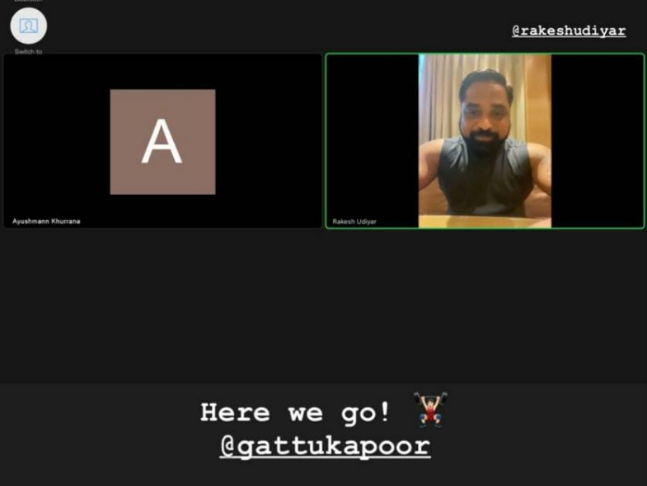 “It is now certain that Ayushmann is hiding his look. He is purposely being elusive on social media because he doesn’t want anyone to get a glimpse of his transformation before he starts shooting. Since he plays a cross functional athlete for the first time, Ayushmann will have to change his body type completely and that first look is definitely a big visual for everyone to catch hold off. He is definitely protecting his look or else why would he not upload his images?” says a trade source.

“Ayushmann can really protect his transformation because he is in Chandigarh and we think he intends to do just that till the first look is released by him. By the way he is being elusive, it seems like it will be a look to watch out for. Abhishek and Ayushmann have definitely planned a big surprise for audiences. So, let’s keep an eye on how and when Ayushmann’s look comes out,” says the source.