Advertisement
HomeBOLLYWOODENTERTAINMENT NEWSSaif Ali Khan remembers his 'Ole Ole' choreographer Saroj Khan, says, 'she was the most artistic choreographer in the film industry'

Bollywood's beloved dance guru, Saroj Khan, on July 3, breathed her last after suffering a massive cardiac arrest. The veteran choreographer, 72, left behind an unmatched legacy in the history of dance. While her family is coping up with the loss, the film industry is remembering priceless moments spent with her. Talking about Masterji, Saif Ali Khan who teamed up with her for Parampara, Aashiq Awaara and Yeh Dillagi, in a statement, told that she was the greatest and most artistic choreographer. Remembering an incident when he injured his knees while dancing to the title song of the film Aashiq Aawara.

"Saroj ji was the greatest and most artistic choreographer in the film industry I joined in 1990. Her name involved with a project was always a huge advantage to the producers and her style of choreography had the top talent of the film industry making the music come alive with grace and sensuality. I did my first film and first song ever with her in Parampara followed closely with Aashiq Awaara, the title song of which was a big hit and stabilised my floundering career. She had me doing some trademark moves on my knees on a sweaty, incredibly hot and crowded set with no air conditioner and lots of chemical smoke. I think only my colleagues from the 90s and before will understand the conditions I mean. I finished the step and found I had torn the knees of my trousers and blood was trickling down my leg. I told Saroji, or masterji as I called her, and she said, "Oh don’t worry about blood. See where this blood takes you in life.". She taught me to work hard. I would turn off the set lights and wrap a mal mal cloth around my head and rehearse her steps for hours, often without lunch, to get it right; but we were never allowed to change the step to make it easier. That was not her work ethic," Saif told. 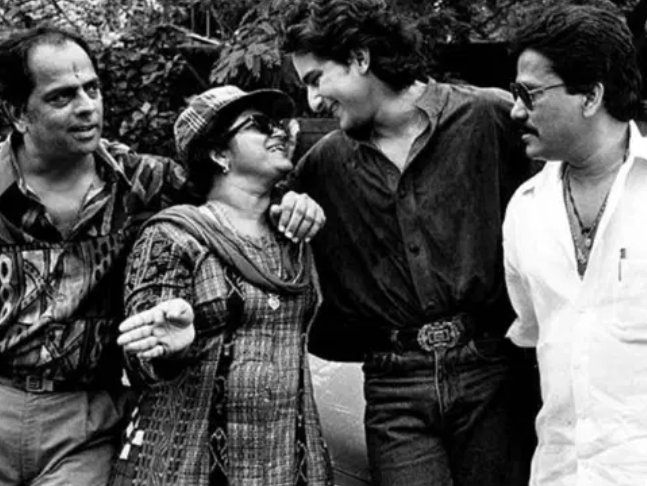 Recommended Read: Saroj Khan's daughter Sukaina Khan says celebrities like Madhuri Dixit, Subhash Ghai and others were in touch with her, reveals Salman Khan 'stood with the family like a rock'

Recalling the shoot of Ole Ole from Yeh Dillagi, Saif said she owes her for taking the song to another level. "She knew what style suited each of us actors best and would create that for us. She made me rehearse for a week for a song I was to do with her and when I got to the set she made me perform it in one go in front of the unit. When I finished panting, she said, "Ok, now forget all that, now that you’re easy with the song let’s try something better!” That song was Ole Ole in Yeh Dillagi and she took a hit song to another level. I must have performed this song a few hundred times on stage on international tours, often three times in a row to encores! I will always owe her (and Jojo and Ahmed khan who at the time we’re her young assistants! Later they became big names in their own right) for this song and making me into a dancing star - an incredible feat as I have two left feet!!! I was shooting a lovely romantic song late at night in Hyderabad and the heroine was having a bit of trouble with the expression. Sarojji yelled on the mic, "Sex!!! It’s sex!! Have you never had sex ?????" She could shame us into performing!" he added.

Saying that her songs would often become real art, Saif thanked her for everything she gave to choreography and actors in Bollywood. "A song with her often became real art, with every beat and step requiring an emotion and expression. Like she told Kareena once, "If you can’t move your feet, move your face at least!!” That era is gone and that music is over, but for all of us who have had the privilege of being instructed on set by that great lady, will never be able to hear a Hindi film song without thinking of how she has made the greatest names in Bollywood from Amitabh Bachchan and Sridevi to Shahrukh khan and Madhuri Dixit, dance to her tunes. Rest in peace Masterji, and thank you for everything you gave us," Saif concluded.