Advertisement
HomeBOLLYWOODENTERTAINMENT NEWSPeace Out! Sonakshi Sinha and Saqib Saleem deactivate their Twitter accounts, say they want to ‘stay away from negativity’

Peace Out! Sonakshi Sinha and Saqib Saleem deactivate their Twitter accounts, say they want to ‘stay away from negativity’

Sonakshi Sinha deactivated her Twitter account today. Her last tweet read, “The first step to protecting your sanity is to stay away from negativity. And no where more of that that Twitter these days! Chalo, im off-deactivating my account. Bye guys, peace out.

She shared the screenshot of her tweet on Instagram as well and captioned it, “Aag lage basti mein... mein apni masti mein! Bye Twitter.” Sonakshi and several other celebs that belong to film families have been getting a very raw deal from the Twitterati since the last few days. Sushant Singh Rajput’s demise has spurred a movement wherein people are vowing to boycott films starring the star kids and calling out the nepotism and supposed Bollywood mafia in the entertainment business.

RECOMMENDED READ: ‘Done with Twitter, just a breeding ground for hate and negativity,’ says Director Shashank Khaitan as he deactivates his account on the micro-blogging site

On the other hand, Saqib Saleem has also said a farewell to the micro-blogging site. He tweeted, “I am breaking up with you Twitter,” and shared a note where he says, “Twitter has become a place for bullies. Stay kind.” 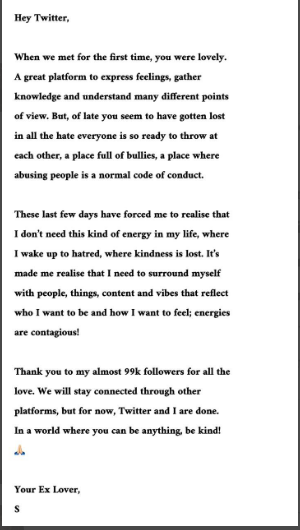 A few days back director Shashank Khaitan had also deactivated his Twitter account in the wake of the backlash that was coming their way due to Sushant’s untimely and tragic demise.