Advertisement
HomeBOLLYWOODENTERTAINMENT NEWSShah Rukh Khan to reportedly play the role of a journalist in R Madhavan’s 'Rocketry: The Nambi Effect'

The fans are eagerly awaiting R Madhavan’s film Rocketry: The Nambi Effect ever since the makers announced the film last year. The film is a biopic and marks Madhavan’s directorial debut as well. It is based on ISRO’s legendary scientist Nambi Narayanan. Earlier it was reported that Shah Rukh Khan and South superstar Suriya were roped in to play cameos in the film. It was said that SRK will make a special appearance in the Hindi version of the film whereas Suriya will essay the same role in the Tamir version of Rocketry: The Nambi Effect.

Now, a leading daily report says that SRK will play the role of a journalist in the film. Shah Rukh is also making a cameo as a scientist in Ayan Mukerji's Brahmastra starring Alia Bhatt, Ranbir Kapoor and Amitabh Bachchan. “Ayan (Mukerji) and Maddy are extremely fond of SRK and believed no one but he fits the bill. Neither are run-of-the-mill cameos, but are integral to the plot and carry the narrative forward." revealed a source close to the development, adding that SRK shot for the role last year.

"In Rocketry, he (Shah Rukh Khan) plays a journalist who interviews scientist Nambi Narayanan and takes us through the protagonist’s journey in flashback," added the source. 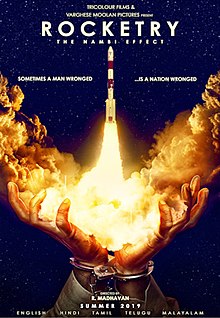 For the unversed, SRK and Madhavan share a good rapport as the latter had also done a cameo in Shah Rukh’s last release Zero that also featured Katrina Kaif and Anushka Sharma in the lead and was directed by Aanand L Rai.

Rocketry: The Nambi Effect is based on the life of Nambi Narayanan who was charged with espionage and was falsely accused and arrested. However, he was able to prove his innocence and was set free later on. Director-actor Anant Mahadevan was supposed to helm the project but when he left the film, Madhavan decided to take over.  The film is being produced by Tricolour Films in association with Vijay Moolan Talkies and Saffron Ganesha Entertainment. The film is trilingual and is being made in English, Hindi and Tamil.