Advertisement
HomeBOLLYWOODENTERTAINMENT NEWS'Proud of all 3 of you,' says Anil Kapoor and Sunita Kapoor as they celebrate 2 years of 'Bhavesh Joshi' & 'VDW'; son Harshvardhan trolls his mother

'Proud of all 3 of you,' says Anil Kapoor and Sunita Kapoor as they celebrate 2 years of 'Bhavesh Joshi' & 'VDW'; son Harshvardhan trolls his mother

On June 1, Sonam K Ahuja's and Rhea Kapoor's Veere Di Wedding and brother Harshvardhan Kapoor's Bhavesh Joshi completed two years. The special occasion was marked by parents Anil Kapoor and Sunita Kapoor who took to their social media handles to share with the world how proud they are of their kids.

Sharing a picture of the cast of VDW and poster of Bhavesh Joshi, Anil and Sunita wrote, "Celebrating 2 years of #VeereDiWedding & #BhaveshJoshiSuperhero. One received great commercial & theatrical success and the other created a massive cult following digitally. Breaking barriers & winning hearts!! So proud of all 3 of you" 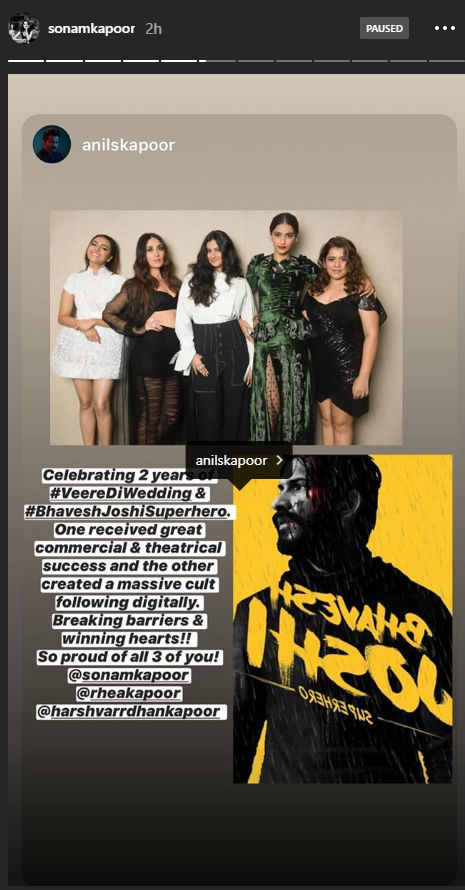 While daughters Sonam and Rhea were all hearts for their parents love, their youngest sibling Harshvardhan dropped a funny comment on his mother Sunita's post, pointing out how she shared an inverted poster of his film. The actor's comment read, "My poster is inverted" to which Sunita replied, "Ohh sorry."

The 2018 comedy-drama, Veere Di Wedding Kareena Kapoor Khan, Sonam K Ahuja, Swara Bhasker, and Shikha Talsania in the main roles. The film made all the right noises about BFFs, progressive outlook, and great BO business. On the other hand, Harshvardhan's super-hero film Bhavesh Joshi didn't do any wonders at the ticket counter but was well perceived as its premiered on Netflix.