Former Bollywood actress Zaira Wasim deleted her Twitter and Instagram accounts on May 29. She was heavily trolled and received flak for quoting from the Quran in one of her tweets while talking about locust attacks.

On May 28, Zaira shared a verse from the Quran, which mentioned the five plagues of Egypt, including the swarm of the locusts. “So We sent upon them the flood and locusts and lice and frogs and blood: Signs openly self explained: but they were steeped in arrogance- a people given to sin” -Qur’an 7:133,” the Dangal star wrote in her tweet. 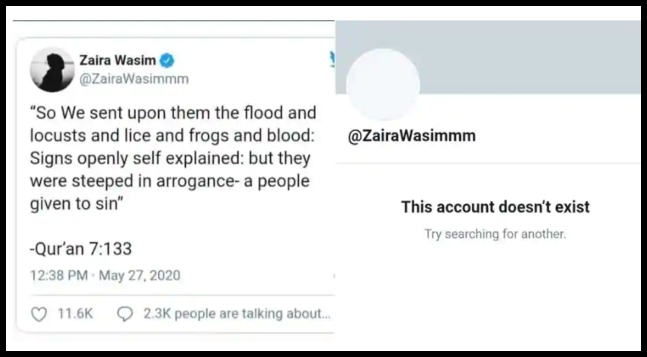 Recommended Read: Zaira Wasim releases a statement saying she is not 'righteous' after Babita Phogat attacks her over Tablighi Jamad threats

Soon, she started receiving hateful comments from netizens who interpreted her post as a justification of the locust attacks. They felt that Zaira was suggesting that the incident is God's way of expressing wrath. Shortly after being deluged with such comments, Zaira deleted her Twitter and Instagram accounts. However, a section of netizens continued to attack Zaira on her Facebook page, where she put up the same post.

Commenting on the post, a user wrote, "Lady you must have taken into account of those people of JK, Kerala and elsewhere who are also suffering from the virus. Moreover the crops which are damaged by locust had no name as to who will consume them. In this hours of crisis please post something which is positive and reflects your education."

However, later, #StandWithZaira picked up as a trend on Twitter who felt she had done nothing wrong.

So what if she posted Qur'an verses??
Each and every particular thing is there in Qur'an and this is our believe, which is now proved by science too...
Go through the Qur'an once you could find everything there.
To Troll a girl showing your mentality level#StandWithZaira pic.twitter.com/aYuMWagFof

Zaira Wasim tweeted the verse of the Quran, after which he was trolled, while every Indian has the freedom to follow his religion and religious beliefs by the Constitution. Why is #zairawasimmm being targeted ? Where are feminist org... and women's commissions ?#StandWithZaira

I Stand Against Targeted Harassment..

I Request You to Stand Against Harassment..

Zaira had announced that she was leaving the Hindi film industry in 2019 as it interfered with her faith. She wrote, “As I had just started to explore and make sense of the things to which I dedicated my time, efforts and emotions and tried to grab hold of a new lifestyle -- it was only for me to realise that though I may fit here perfectly, I do not belong here. This field indeed brought a lot of love, support, and applause my way, but what it also did was to lead me to a path of ignorance, as I silently and unconsciously transitioned out of ‘Imaan’ (a Muslim’s steadfast path in Allah’s devotion). While I continued to work in an environment that consistently interfered with my Imaan, my relationship with my religion was threatened.”