Nawazuddin Siddiqui has been making the headlines for the past few days not for his stellar acting chops but for receiving divorce notice from his wife Aaliya Siddiqui. Aaliya has alleged that Nawazuddi has not been a family man and often used to ridicule and insult her in front of his actor friends. She had also said that he doesn’t live with her and their children. Now, she has put forth her demands of a hefty alimony as well as the sole custody of their two children.

As reported by a portal, Aaliya has demanded alimony of Rs 30 crore and a 4 BHK flat in Yari Road. She has demanded a permanent alimony of Rs 10 crore for herself and Rs 10 crore each as security fixed deposit for their two children. However, Aaliya did not confirm this and told the portal when they reached out to her that it is her ‘personal matter’. She said, “This is my private matter. Whatever I had to say I have said to the media. I don’t want to comment any further. Whatever is being circulated is false and the matter is between me and Nawaz.” Nawazuddin has refrained from giving any official confirmation on the same.

Aaliya has also joined Twitter and in a series of tweets bashed the fake news circulating about her alleged affair with a journalist friend as well as a copy of her divorce notice being in circulation. She dismissed the claims and reiterated that the said photograph in circulation was a cropped and doctored one and is being used as a PR gimmick to malign her reputation. Take a look at her tweets below. 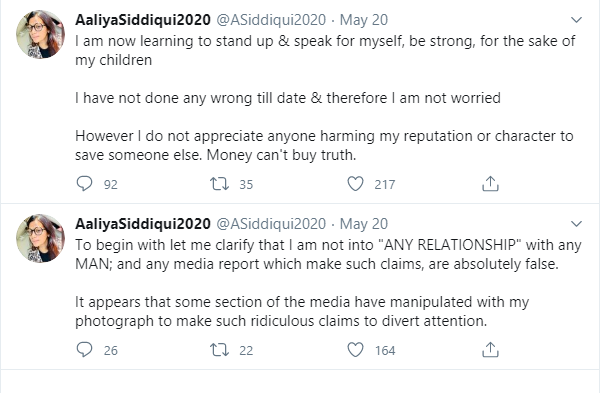 RECOMMENDED READ: Told him not to write about his past affairs but he thought he was being 'mahan': Aaliya Siddiqui on husband Nawazuddin Siddiqui's controversial autobiography 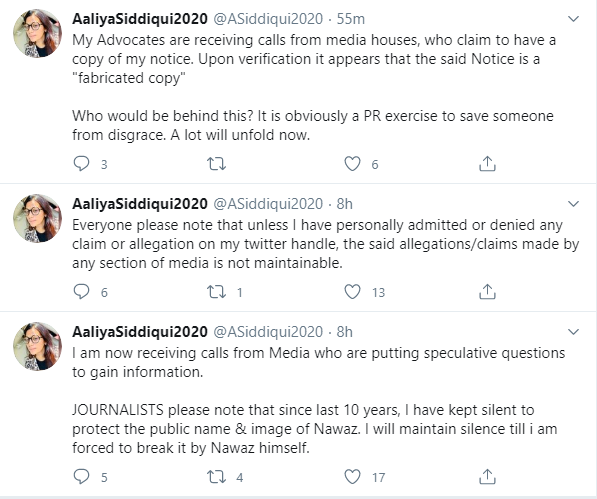 Aaliya’s lawyer mentioned that due to lockdown Nawazuddin has been served the divorce notice through WhatsApp and email but no reply has come from his or his lawyer’s end. He said that they have sent the notice on May 7 and they should have received a reply by May 22 but no response has been received yet. It is also being reported that Nawaz has agreed to all of Aaliya’s demands and will not be contesting the custody of their children and will also provide her maintenance. However, no official confirmation has come from the actor’s representatives yet.