Hitesh Kewalya, with the recently released Shubh Mangal Zyada Saavdhan, took a step ahead to normalise the conversation of LGBTQ+ in India with a dash of humour. Starring Ayushmann Khurrana, Jitendra Kumar, Neena Gupta and Gajraj Rao in the central roles, the film garnered appreciation not just across the country but on global platforms too. A sequel to Shubh Mangal Saavdhan which dealt with erectile dysfunction, Shubh Mangal Zyada Saavdhan was a perfect addition to the franchise. Talking about the film and its impact, Hitesh, in an interview with an entertainment magazine, recalled what went behind making the project. The filmmaker said that Ayushmann and Jitendra, the lead actors, trusted him and his vision with respect to the kissing shot. Dealing with every aspect sensitively, the scene struck the right chord.

“They trusted me. There were eight to nine retakes in the kissing scene. The two-three takes in beginning were only to make them comfortable… I’d never ever thought that I’d be directing two men to kiss each other. I didn’t want to over sexualise it, yet handle it sensitively. I wanted a vulnerability in the kiss, which a gay person goes through. We shot the first kiss in a static train compartment. We sent everyone out from the spot… There were some embarrassing laughs. But we soon realised the human aspect of the kiss. We started seeing ourselves as crew, as actors, as DOP, as Ads. We started looking at the kiss as an expression of love and not sexually as such. Of course, there’s some sexual chemistry involved. But when you see a thing again and again, it starts appearing normal to you. That moment I realised that this is what the film will do,” Hitesh told. 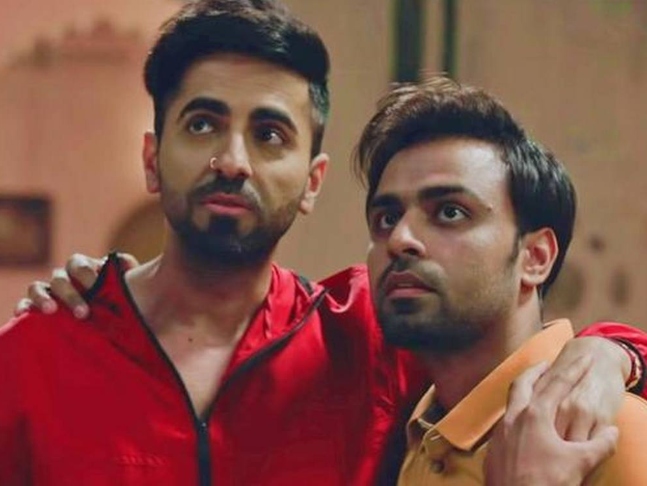 Recommended Read: After observing Neena ji during the shoot, even I started styling myself: Manu Rishi Chadha talks about his experience on 'Shubh Mangal Zyada Saavdhan' sets

Discussing Shubh Mangal Zyada Saavdhan, Hitesh, who was the writer of the first film in the franchise, confirmed its third part. The filmmaker told the magazine that Shubh Mangal Saavdhan 3 is on the cards but it will take time. He further added that he wants to look at love in a deeper way in the third edition which will be an uphill task.

“Shubh Mangal Saavdhan part 3 will surely come. But it will take time. We should have a topic to talk about. It should be pertinent. It should be done responsibly. It will be a bigger challenge than part 2. But we will certainly do it. I want to look at love in a deeper and human way,” Hitesh added.

Floral buns and understated looks: Dia Mirza’s simple yet stunning wedding glam is a calling for all the low-key brides!