Advertisement
HomeBOLLYWOODENTERTAINMENT NEWSRadhika Madan shares her experience of working with 'papa' Irrfan in 'Angrezi Medium', calls him warm and endearing

Radhika Madan shares her experience of working with 'papa' Irrfan in 'Angrezi Medium', calls him warm and endearing

Radhika Madan, after making a mark for herself in television with the show Meri Aashiqui Tum Se Hi, stepped into films with Vishal Bhardwaj's Pataakha and emerged as an actress to watch out for. Now, the two-film old actress is gearing up for her upcoming film with Irrfan titled Angrezi Medium wherein she plays the role of his daughter Tarika Bansal who desires to pursue her higher education abroad. With the film hitting the theatres in a week's time, Radhika is keeping busy with back to back promotions. During one such interview, the actress spoke about working with Irrfan for the first time. She went on to also reveal what were her first words to the veteran actor on the film's set. Radhika also said that Maqbool and Paan Singh Tomar are Irrfan's best in her viewpoint.

“His performances in Maqbool and Paan Singh Tomar are my favourites. We met a couple of times for readings before shooting began. The first thing I said to him was, ‘Hello pappa’. He is extremely sweet, warm and endearing,” Radhika told. 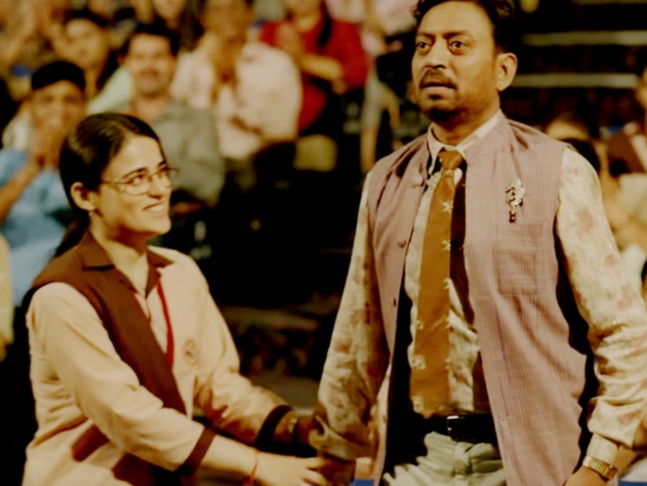 Recommended Read: Watch: When Deepak Dobriyal as Mr. Ghasitaram from 'Angrezi Medium' attempted speaking in English with Radhika Madan at the visa-office

Angrezi Medium which is a sequel to the 2017 hit film Hindi Medium is directed by Homi Adajania and produced by Dinesh Vijan. It will also star Kareena Kapoor Khan as a cop named Naina. The other actors in Angrezi Medium include Pankaj Tripathi, Dimple Kapadia, Deepak Dobriyal, Myrah Dandekar, Poorvi Jain and Manu Rishi Chadha. Angrezi Medium is scheduled to release on March 13, 2020.